The Salem Animal Shelter received a call from a woman who found a litter of small kittens in the street. One baby stood out among them, with a very strange appearance. The kitten had strange skin that formed folds on its body. A volunteer named Tara came out to help the woman. The girl helped the animals. Most often her charges were those animals that needed treatment and special care. 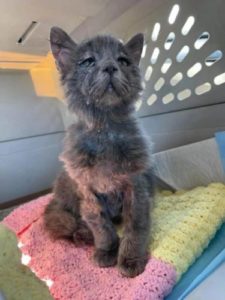 Tara took the kitten to the shelter. There he was examined and diagnosed with skin hyperelasticity. It is not a dangerous disease. But animals suffering from it require very specific and careful care. Any strong impact on the skin of an animal with this condition causes cracks in the skin. The kitten had almost no chance of surviving on the street. After all, there he was threatened by the cold, collision with other animals and other problems. The kitten could only live a long and happy life if properly cared for and nurtured by loving owners.

Tara named her ward Teddy. She found out that he is only five months old. He is very trusting and brave. The kitty did not resist the procedures. On the contrary, he reacted happily every time his skin was treated with special solutions. The treatment was needed to strengthen the kitten’s skin and make contact less traumatic for him. 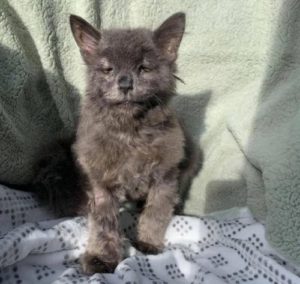 At the next step, new owners were looking for Teddy, and it turned out to be a much more difficult task. The disease made the kitten’s appearance very peculiar. When he was still very young, he looked like a tired old cat. Teddy behaved as kittens of his age. He liked to play, was affectionate and sociable. But most of the shelter visitors did not notice this, focusing only on his appearance.

The shelter has so far been unable to find owners for the kitten, but Tara is optimistic that they will soon find people who will recognize that the kitten has a good heart and wants to be loved. Until then, she will continue to take care of him.