Chloe the cat lived 13 years of her life together with her beloved owner. But one sad day the man died, and the cat ended up in the shelter. The move to the shelter was a real stress for Chloe. She had always been her owner’s only pet. And now she had to live in a cage and share the shelter staff’s attention with other animals.

It took a long time for Chloe to adjust to the new conditions. She really needed attention. That is why she greeted each visitor with hope, wishing that he or she would take her home. To each visitor the cat stretched its paw through the bars of the cage, as if trying to get support from people. It soon found that this unusual way of greeting visitors had its effect. 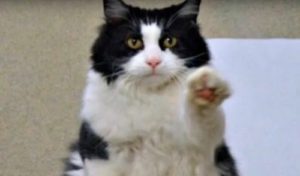 Terri came to the shelter to choose a pet. When the woman walked past Chloe’s cage, the cat, out of habit, held out her paw. The woman was impressed with the cat’s friendliness and decided to take her from the shelter. After learning the story of her future pet, Terry was only more convinced of the correctness of her decision. 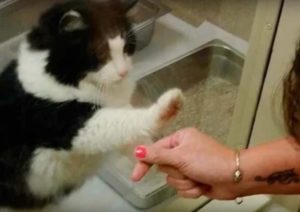 Chloe found a new home and a new owner, with whom they immediately developed a mutual affection. Terri helped her to overcome her depression, although sometimes the cat is still sad. The woman thinks that in her moments of sadness Chloe remembers her life with her former owner. Despite periods of sadness, most of the time Chloe is in a good mood. She adores her owner, and can sit in her arms for hours. Every morning, the cat comes to Terry’s room to wake her up with its song.