Passing by a lonely house, caring people noticed a cat. She was shabby, with wounds on her body, and there was a kitten next to her. At first, the eyewitnesses did not understand what was going on, but then they looked closer and saw a strange picture… 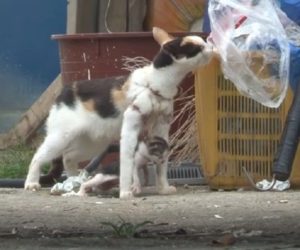 Seeing the people, the cat ran away. The little kitten, as if tied, rushed after her. This surprised people very much, and they decided to follow where the cat would go, and what it was doing near an abandoned house in general. 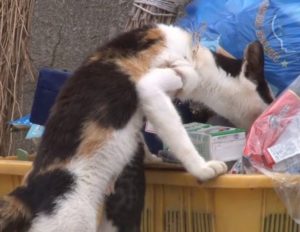 When people managed to catch up with the cat and saw her again, they were shocked… It turned out that there really is a rope on the cat’s neck and paw, and a kitten is tied to it. The baby was alive! At the same time, he was in an uncomfortable position because he could not move independently and dragged himself after his mother, to whom he was tied. 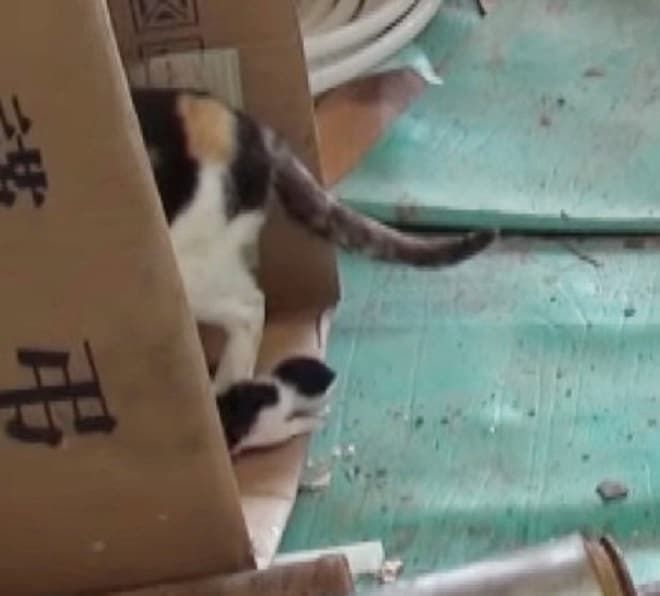 After sitting for a while, the cat ran up the stairs and jumped into the dumpster. She was hungry and looking for food, and the baby was patiently nearby, experiencing obvious inconveniences.

Then the cat rushed to the warehouse, which turned out to be a box. When people went to the building, they understood why Mom came here. Besides the poor kitten tied to her paw, there were other babies here. 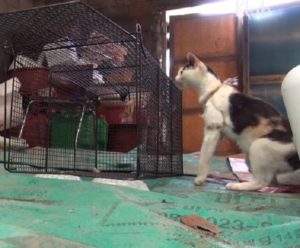 Later it turned out that a furry family is often helped by one woman. Moreover, she knows that the cat often gets entangled in the rope from which the nets are made, which is in the warehouse, and this time a kitten landed here. Since the cat is wild, she does not let anyone near her. But by some miracle, the kitten still got free.

After learning about this, people rushed to help. It was decided to set a trap, into which the four-legged mother instantly fell. She began to toss and turn in fear.But people were happy that she was caught. After all, now she and the kittens could be cured. 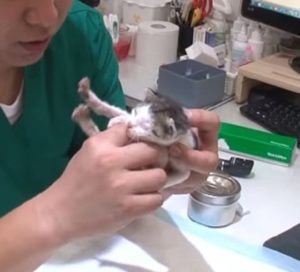 When the cat got to the vet, he finally managed to remove the mesh from her, as well as treat the wounds that were on her body. After that, the kittens were examined, treating those who needed medical help. And finally, the kids were sent to the four-legged mother under the “wing” so that she would not worry. Now they are all on the mend! 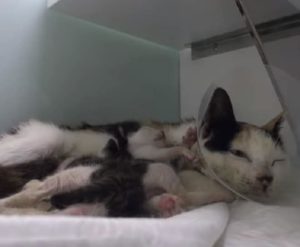