Toodles the cat was two years old. And she had spent most of her life under a mobile home in a trailer park in the United States. The cat took care of herself until one collision with stray dogs resulted in multiple injuries. Toodles was badly injured. So after noticing her condition, people took the cat to a shelter. 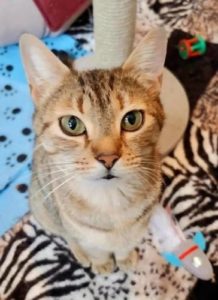 At the shelter, the cat was very restless. She would never stay in one place for a minute, constantly trying to run away and attract attention with her loud meowing. When the cat was examined by a veterinarian, the reason for her anxiety became apparent. According to the doctor, the cat had only recently become a mother and was nursing her babies.

Apparently, the anxiety about the babies and did not give the animal any peace. Volunteers immediately went to the trailer park where they found Toodles. Having thoroughly searched everything on the spot, they managed to find five kittens. The kittens were brought to the shelter and Toodles immediately calmed down and began to feed her babies. 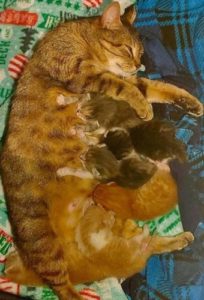 After the feeding, the cat came back in an excited state. And although she meowed a little quieter, it was clear that something was bothering her. Volunteers went to the trailer park again. This time they checked not only under the old van, but also inside it. People found another kitten in the motor home, which had hidden in a narrow crevice and was sitting there waiting for its mother. Only when the sixth baby was next to her in the shelter did the cat finally calm down. 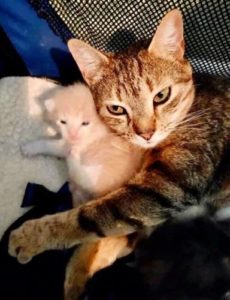 The last baby that was found turned out to be happy. After all, he went to a new home with his mother. Now the cat and her baby will always be together. For the rest of the cats there were also soon found loving families.