Charlie had lived with the family for a long time and was everyone’s favorite. The dog was already elderly. So the family decided to get another pet, deciding that Charlie could be kept company by a cat. That’s how Scout came into the house.

The owners were worried about how the dog and the cat would get along in the same house. But, as it turned out, their worries were unfounded. Charlie took the cat very warmly right away and even began to raise the baby. The cat and the dog became the best of friends. They spent a lot of time playing together and sleeping side by side. 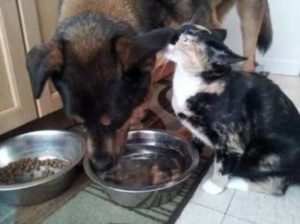 Unfortunately, Charlie was already elderly and was soon gone. The whole family took the loss of their pet very hard. But most of all the death of a friend affected Scout. The cat could not believe for a long time that the dog was gone. He was constantly looking for him in the house, refused to eat and could not sleep. Scout could lie still for hours staring at one point, as if he were waiting for his friend to appear. 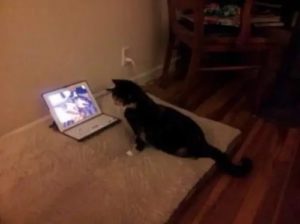 This went on until Scout saw the screen saver of the owner’s laptop, on which, as a sign of remembrance, people had installed a picture of Charlie. The cat immediately ran up to the laptop and laid his paws on it to sleep soundly. Every night Scout began to walk over to the laptop, look at Charlie’s photo and fall asleep. Since Scout was able to watch photos and videos of Charlie, he gradually began to come out of his depression. So his owners have hope that soon the cat will become active and cheerful again.

Twins married twins surrounded by hundreds of other twins
«We knew the odds were unlikely, but marrying twins was very, very important to
LIFE STORIES 0 60

The man rescued and raised the goose and then decided to let it go, but it came back. Now it always flies with its owner nearby
A man saw a baby goose on the lake near his home with sick
ANIMALS 0 7

What did a cat afraid of injections do when he saw a veterinarian preparing to vaccinate a dog
This story happened in the capital city of Peru. The owner of a large
ANIMALS 0 51