When this cat was brought to an animal shelter in Texas, it was scary to look at. The cat was two years old and spent all this time in a small, cramped plastic cage, which is used for carrying cats.

The cat’s name was Samuel. He was rescued from the owner’s house, who turned his house into a garbage dump. The owner did not pay attention to the garbage, the stench and his appearance. It seemed a miracle that he even found time to feed the cat. Otherwise Samuel would have died long ago. 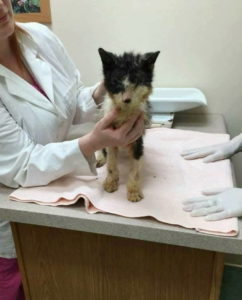 The cat was emaciated, covered in urine and feces. His fur was in terrible condition, and his eyes had not opened for a long time because of the purulent crust. But when they pulled him out of the carrier, he reached out to people and purred!

Unfortunately, Samuel ended up in an ordinary city shelter, where cats and dogs are euthanized after a certain period of time, during which they must find an owner. Without treatment, Samuel had no chance of survival, but he was lucky.

The photo of the unfortunate cat was seen on social networks by veterinarian assistant Leslie Raines from Houston and she immediately agreed with the animal rights group “Purrfect Cat Rescue” to take the cat under care together with them and start treating him. 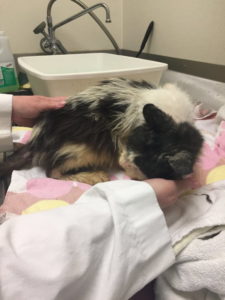 On the same day, Samuel was brought to the Raines Veterinary office for an examination. The cat’s condition turned out to be depressing. He had anemia, there were spots of scabies on his coat, there was damage to the cornea in one eye, his teeth were in poor condition. Despite the fact that the cat was still very young, there were poor liver and kidney indicators and, in addition, the cat tested positive for FIV (Feline immunodeficiency).

“I have been working as a veterinarian’s assistant and an animal rescuer for many years, and I understand that many people would call Samuel’s appearance unpleasant when they saw him. But I know that somewhere inside there lives a healthy and beautiful cat who is just waiting to be helped,” says Leslie Raines. 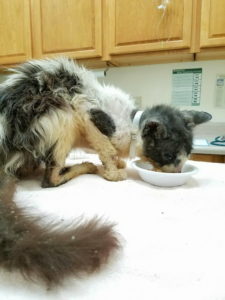 The Purrfect Cat Rescue Society has decided to take over all medical expenses for Samuel’s treatment. The cat turned out to be very brave. He endured all the necessary injections, medication and other unpleasant procedures without resistance and steadfastly, and after the start of treatment he began to gain weight well.

As soon as Samuel’s scabies and eyes were cured, Leslie began to take him home with her to take care of him, stroke him, caress him and show the suffering cat that human society can be very pleasant.

“In all these years, I have not seen a more emotionally damaged cat than baby Samuel,” the woman admitted. 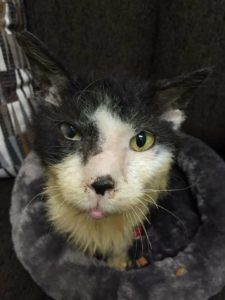 Samuel persevered and purposefully followed the path of treatment to recovery. And it was a long process, where there were many obstacles. But the little furry fighter did not give up.

At Leslie’s house, Samuel was afraid to climb inside the carrier and preferred to sit on top of it. He was also afraid of his reflection in the windows and even just walking around the house. For several months, while Samuel was recovering and being treated, he gradually got used to not being afraid of the sofa, chair and bed. He just didn’t understand that it was possible to lie comfortably on these things. 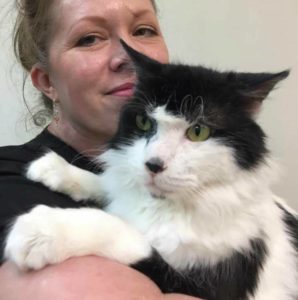 He had to relearn how to walk on his paws, get used to communicating with a person and not be afraid of other cats. Gradually Samuel got closer to Leslie and purred very loudly when she stroked his long hair.

“He turned out to be very sweet and affectionate. And when I brought little kittens into the house for a while for nursing, Samuel would come up to them, sit next to them and even “talk” with them. And they could play aggressively with his tail and he didn’t chase them away and was very patient.” 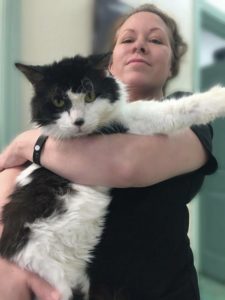 When the moment finally came when the cat was healthy and he could find a permanent owner, a new problematic period came. The cat was very afraid of other people. But one day a man named Brian came who found the key to Samuel’s character.

“Brian’s quiet and calm demeanor affected Samuel and his behavior struck me. While we were talking with Brian, Samuel came up to me and meowed several times, although he is usually silent. And then he came up to Brian.” 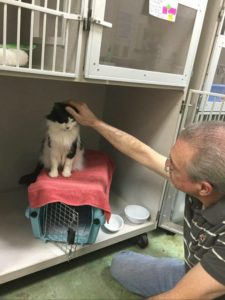 It’s been 10 months since Samuel got to Leslie. During this time, he turned from a skinny cat into a well-fed one, from completely ill, almost dying, to completely healthy, from unhappy and tortured to joyfully meowing and happy.

Samuel will have many good years ahead and this story has an ending like in a good fairy tale. Samuel’s life, in fact, has only just really begun. 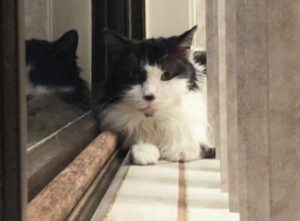