She was in the entryway of a five-story building on business. On the window between the last two floors there was a cat, heavily covered with dust. The cat was sleeping on an old towel that served as his bedding, and there was a litter box and a bowl on the window sill nearby. There was some litter in the tray, but the bowl was completely empty.

We hoped that the cat belonged to one of the tenants of the house or someone had sheltered it during the cold weather in the entryway. But a canvass of residents shattered our dreams. The cat had been dropped off in the entryway. None of the locals knew whose it was and how it ended up in their house. Our volunteer Larisa realized that further searches for owners were useless. So she put the cat, which she had already named Semyon, in a carrier and took it home with her. 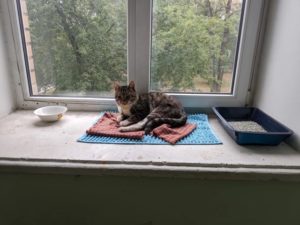 Over time, we finally became convinced that Semyon had been abandoned and had previously been a house cat.

The cat was happy to be in the house. He
wasn’t at all picky about being put in the corner of the bathroom. He was happy with that as well. The little guy also loves to sit on hands and be scratched. He eats everything without going over his food. 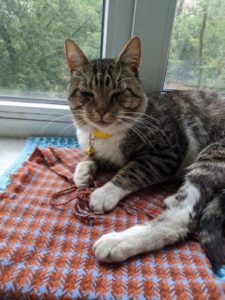 Semyon loves socializing, he is well-mannered and kind. Larisa noticed that the cat was constantly squinting his eyes, even though he could clearly see everything around him. The woman thought his eyes were hurting and took the cat to the vet.

As it turned out, the problems with his eyes were minor, it was not difficult to cure them. But the test results showed a more serious problem. The cat had viral leukemia. Semyon was not sick, but he was a carrier, capable of transmitting the disease to other animals. 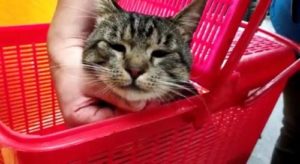 We decided that after learning about the animal’s illness, its owners were frightened and decided to just put the cat out on the street. After all, he obviously did not run away from home on his own, taking a litter box and a bowl.

Larisa could no longer leave Semyon at her place. After all, she had other cats living with her and the risk of infection was very high. She was sincerely sorry to part with her ward with such a wonderful character. But she had to take care of the other animals as well. 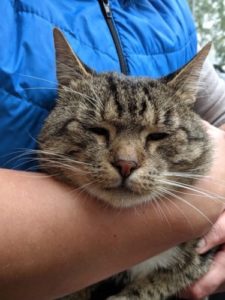 Semyon again has no home, either temporary or permanent. Anya is doing everything possible to get him into a rehome. But with his diagnosis there is almost no chance that anyone will want to take care of him.