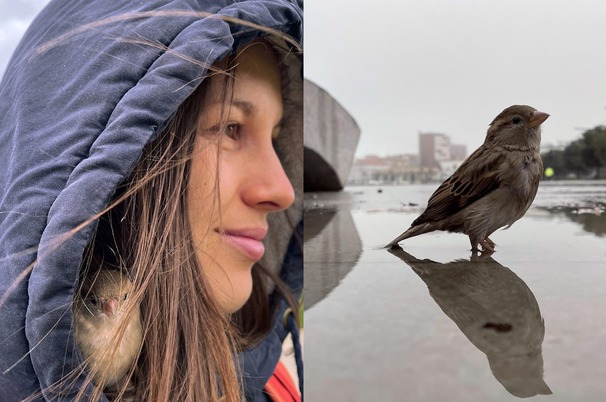 A young couple from Koper (Slovenia) Alyosha and Janja were walking with a child and saw two tiny sparrows on the ground. Unfortunately, one of the chicks had already died, but the second one was alive, albeit very weak.

The husband and wife took sparrow home and began to take care of him as a second child. At first, the chick, which was named Chibi, had to be fed every half hour. And his two-legged parents were not sure that he would survive. But in the end, a tiny and weak ball of feathers got stronger and turned into a charming wild sparrow. Alyosha and Janya knew that they could not keep Chibi locked up in their house forever. And, realizing that their feathered child could already live independently, they let him out into the street and were ready to say goodbye to him.

But after flying around a little, the sparrow returned to the people and calmly sat on the shoulder of the two-legged mother to go home. Since then, Chibi and his “parents” have not parted. Now the sparrow has its own spacious cage, which is always open so that he can fly freely around the house. Alyosha and Janya let Chibi out on the street every day. He looks around the neighborhood and communicates with other birds, and then returns to his family.