A group of divers was exploring the coastal waters in the ocean when a large silhouette emerged from the depths. The shark needed help: it was visible that it was entangled in a net with hooks that were now obstructing its fins. A man from the diving group approached and removed the fishing line, and three months later the shark met him again and recognized the man.

That diver turned out to be the legendary Jim Abernathy, known in Florida as “The Shark Shepherd.”

The man has spent most of his life exploring these formidable sea creatures and knows exactly how to handle them. 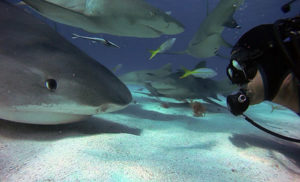 Abernathy helped a shark entangled in fishing nets that day without too much excitement. He could see that the shark showed no signs of aggression and was being watched over by the other divers in the group that were diving with him. 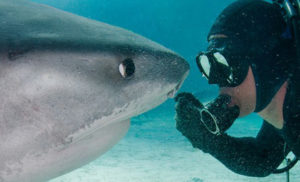 Three months later, he was diving in those waters again. From the depths, a shark once again came up to the man. Abernathy was surprised to realize it was the same one.

“It swam up to me quite calmly, like an old friend. And even let me pet it!” the diver told reporters. 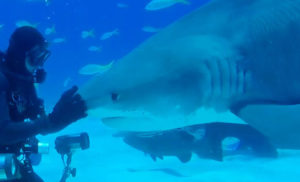 This moment was also caught on video:

Sharks in real life do not always behave as they are shown in the movies. More often than not, humans have little interest in them.