Dogs are like children. They too are interested in new things, they also like bright trinkets, and if there is a baby in the house, you need to buy toys for both the baby and the dog.

And in this video, the dog wanted to play with the baby’s toy, thus making the baby cry. The baby was lying in his high chair and then, the dog snatched his brightly colored toy, which can make noise.

The little baby watched in amazement at first, and then began to cry loudly. When the dog heard the baby crying, he left the toy behind so that he could get closer to the baby and somehow calm him down.

Once the four-legged friend realized what was wrong, he began to make amends. The pet tried in every way to apologize to the child, bringing him various things. The dog did not spare his favorite yellow ball for the baby, took the joystick for the console from the shelf, and even brought it. 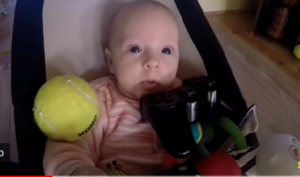 Then, the doggy pulled out some crate from under the crib and began to take out children’s toys and bring them to the baby. As a result, the baby was covered in toys and, of course, was no longer crying. Still, the dog managed to calm him down and ask for an apology.

Such a smart, caring and sweet dog knows how to treat children. What he did is surprising and delightful.

You can’t leave this doggie unattended. You have to see for yourself how caring and touching pets can be. Turn it on, watch, and marvel.