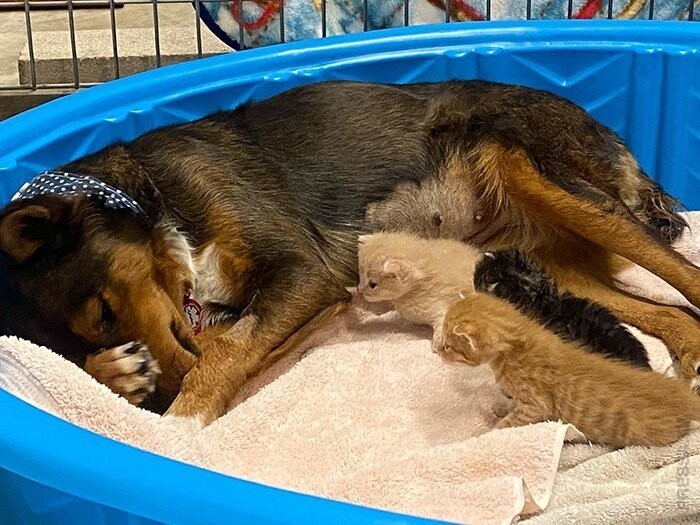 Probably in the wild, a predator would just bite helpless cubs and go about his business. But in the world of people and next to them, everything is different. Georgia is a stray dog that somehow ended up on the US-Mexico border. She ate scraps. Moreover, she was pregnant. But all her puppies turned out to be dead, which caused Georgia to fall into some kind of madness. Maternal instincts prevented her from recognizing reality. She tore up all the mattresses and diapers, tore up the whole aviary in search of puppies. The shelter staff were frankly afraid to approach her. After a while, three orphan kittens of unknown origin appeared in the shelter. And something had to be done with them, too. And then they decided to give the kittens to Georgia’s upbringing. As soon as the dog sniffed the first baby, it immediately grabbed the scruff of the neck with its teeth and put it in its enclosure. The others followed in the same direction. Peace and quiet reigned in Georgia’s soul. The four-legged mother took up an understandable and familiar task. The little ones need to be fed, licked, and looked after. Now all the kittens have grown up and they are applying for adoption. According to the decision of the shelter management, Georgia will be transferred to a compassionate family together with one of the kittens.