This adorable shelter dog rejoices greatly when he finally finds the family he thought he had lost forever.

Chase lived at the Dento Animal Shelter. The shelter staff feared he would never be adopted. Some time ago when he ran away with two other dogs an animal control officer managed to catch him. But when he arrived at the shelter, they found he had no microchip or collar. Chase’s past remained a mystery to his rescuers.

“When Chase first came to the shelter, he was very scared and didn’t want contact with anyone. He was very shy and very withdrawn.” 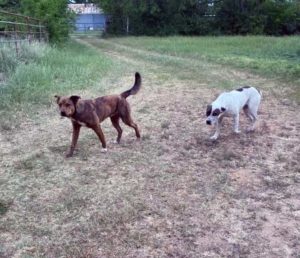 “When we walked him on a leash, he looked scared. His tail was tucked up and shaking. When we tried to pet him, he moved away from us. From the way he was acting, we knew it would be difficult to adopt him.” 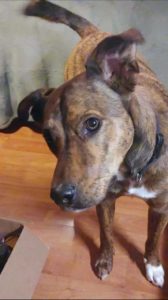 After a few days, Chase was moved to the adoption floor. Misha and the others feared that because of his character and nervousness, he would never find a family. But, as in all fairy tales, miraculously his family found him.

Apparently, Chase ran away from home months ago, leaving his family devastated. For months they had posted flyers with a picture of their beloved dog and searched long but unsuccessfully for him.

The shelter staff wrote on their Facebook page about Chase. And almost six long months later, his owners came to the shelter early one morning. 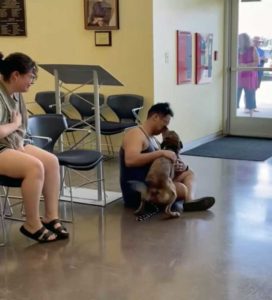 When Chase saw his family walk through the front door of the shelter, he completely transformed into another dog.
Misha recounted:
“Chase had been with us for a week. But he didn’t respond to the staff. So when his father, Hubert, walked in the front door, Chase instantly transformed into a happy, excited dog. He was wagging his tail, jumped up and rushed to his father.”