Do animals understand that their owners have abandoned them and left them to their fate? Most likely they do. But their loyalty has no limits, so they often believe until their last day that sooner or later their owner will come back for them. Such was the case with a dog named Dina. For a long time she was happy with her owner Andrei. But then something happened in the man’s life. He began to abuse alcohol.

Andrei brought Dina into the house when she was just a baby. He fed the dog and took care of her. But as time passed, his craving for alcohol became stronger and stronger. He began drinking daily and rarely had time for anything but vodka. Nor did he have the time or desire to take care of Dina. 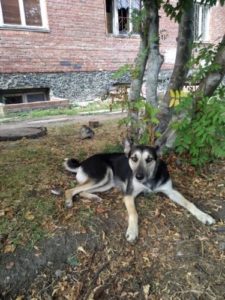 After drinking, Andrei would forget to take Dina for a walk. That was why she often whimpered. The dog’s crying did not please the man’s neighbors, who often started scandals about it.

It also happened that Andrei disappeared for several days, leaving Dina in the yard. The dog always waited for his return without running away or even moving from his place. On such days Dina would beg for food from neighbors and random passers-by. As soon as Dina ate something to eat, she immediately became quiet and calm and did not bother any of the locals.

A few days ago, Andrei’s room burst into flames that destroyed everything inside the room. The man drew completely the wrong conclusions from the situation and instead of pulling himself together, began to drink his grief. He had completely forgotten about Dina. 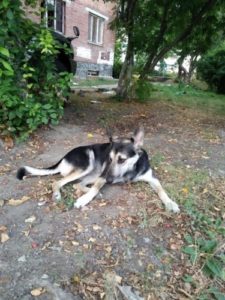 Before the fire, Andrei talked about looking for a new owner for Dina. After what happened, he lost all interest in the dog, stating that he no longer needed her. 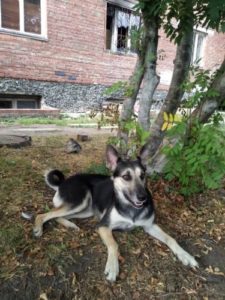 Dina does not understand what happened. She sits outside the dorm and looks at the windows of her room, hoping that the owner will pay attention to her.