The small shelter Lyudmila keeps in her village home has had an unusually difficult day. In the morning the woman had a dog delivered. Finding a cab driver who would agree to drive the animal despite the shelling was not easy at all. The cab driver picked up Ludmila and together they drove to the place where Julia and the dog she found were waiting for them. 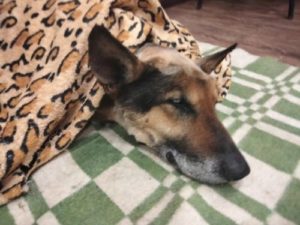 The volunteer had seen animals in different states. But she had no idea she would encounter something like this. In the photo, the sheepdog looked bad. But up close it turned out that her condition was simply terrifying. 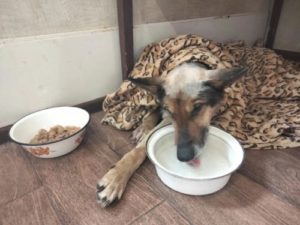 The dog is elderly. What happened to her is unknown, but clearly something terrible. The animal’s body was covered with maggots. Ludmila spent almost the entire day washing and cleaning the animal. It was impossible to leave the sheepdog in the unfinished house in the evening. After all, flies would immediately fly to her. So Ludmila and her neighbor took the dog inside the house. It took the women another three hours to wash and clean Gerda, treat her wound. 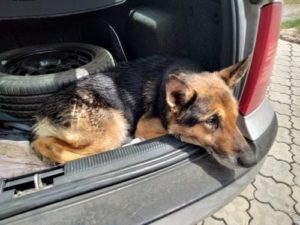 The women were able to remove the maggots completely. But after that another problem became noticeable – worms under the skin, which became clearly visible after bathing and shearing. These parasites are deadly even for healthy animals. And Gerda is very weakened, so the risks are much higher for her. 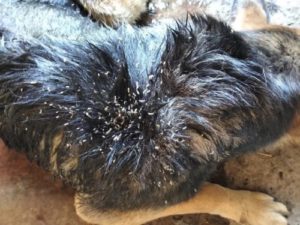 The sheepdog is very weak. She is not even able to get up on her paws. We don’t know yet if this is due to starvation or age and health problems. We have not yet encountered such cases, with the nearest town and veterinary clinic far away. 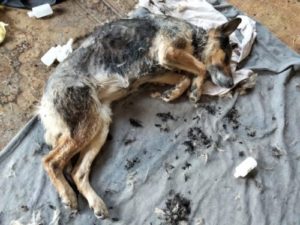 The women tried to get a doctor’s consultation over the phone to take emergency measures. While clean Gerda fell asleep. After all of the burrows were removed from her body, she felt better. But just in case, Ludmila treated her with anti-parasite drops and began injections of hepatoprotectors.