At the end of August, Alberto achieved the dream he had been pursuing for several years: he finished his studies in Accounting and Administration at the National Autonomous University of Mexico (UNAM). One of the most awaited moments arrived, the graduation, and this young Mexican did something that surprised the rest of the students: he went to the ceremony with his dog. 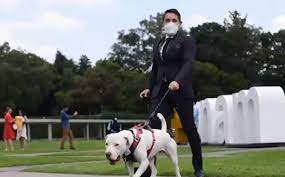 His name is Boss, he is a beautiful Pitbull and he is about to turn two years old. But Boss not only accompanied his owner to the graduation, he became the star of the event. The reason was his attire: he was dressed in a tuxedo so he wouldn’t clash with the rest of the guests. 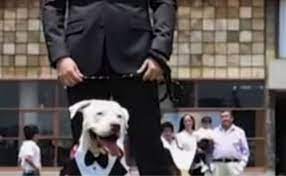 Boss won the affection of Alberto’s classmates, but also of the university’s professors and staff. So much so that they took a picture of him posing with his owner and posted it on UNAM’s Facebook account, which quickly went viral. 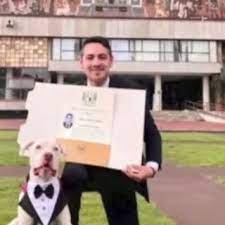 Alberto has explained that Boss is one of the happiest dogs in the world and that he especially enjoys walking through the gardens of the university campus. He appeared almost by chance, as he was thinking of buying a pet and a friend of his convinced him to adopt one. Thus came into his life a little Pitbull just 6 weeks old.

Alberto and Boss have become inseparable and go everywhere together. Also when it was time to pick up the student’s university degree, which he took the opportunity to take a picture with his pet in front of the university facade.