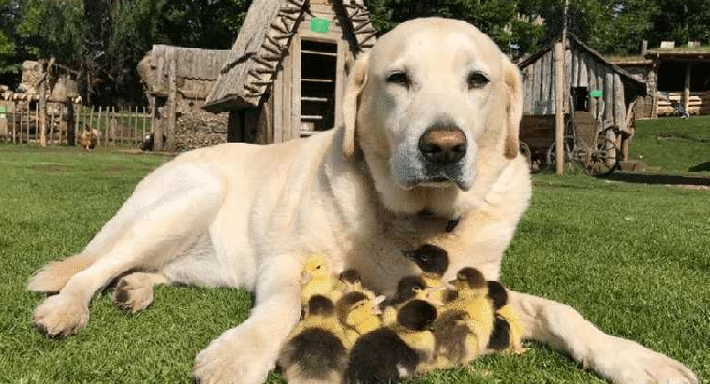 A well-bred English dog, who grew up in a castle, has noble manners since childhood. Yes, it’s not a joke — the Labrador Fred, whom you see in the photo, was born and lives in a real estate — Mountfitchet Castle, which is located in Essex. The former Norman castle was restored and turned into a local attraction, often visited by tourists. And Fred is guarding him! 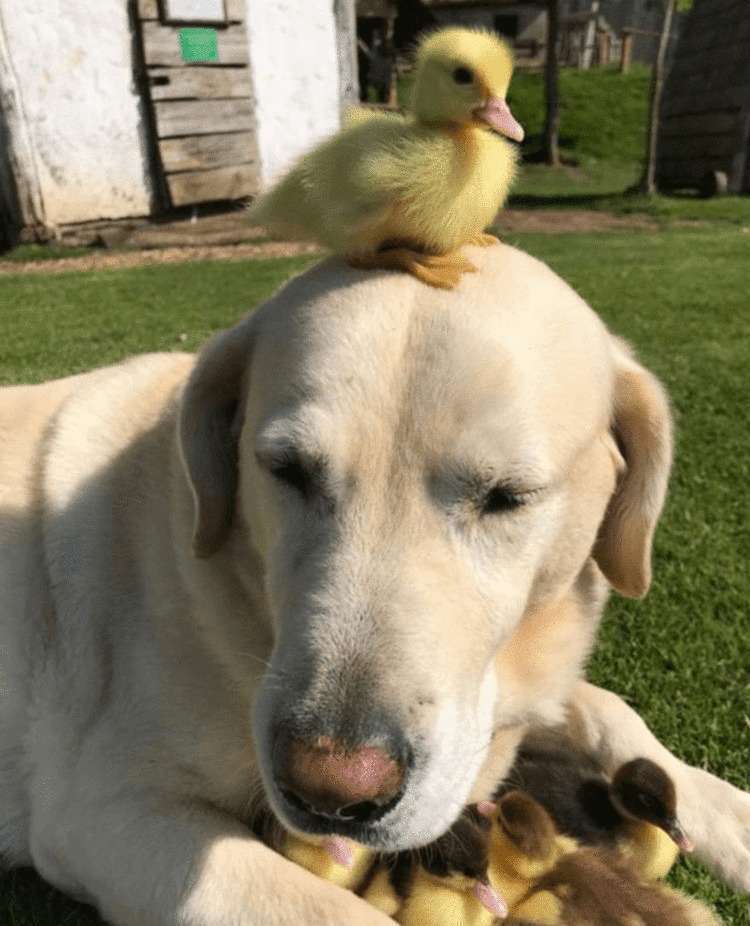 The dog was always surrounded by animals that were rescued or kept by his owners — the owners and caretakers of the castle. He is trained to take care of every living being. For example, he once raised a small squirrel picked up by his owner Jeremy Goldsmith on the road. The squirrel lived in the castle kitchen for six months, and then was released into the forest!

And now a new “zoo connection” has appeared in the dog’s life. Fred recently turned 10 years old (a respectable age for a dog), and then fate decided to make him a father! 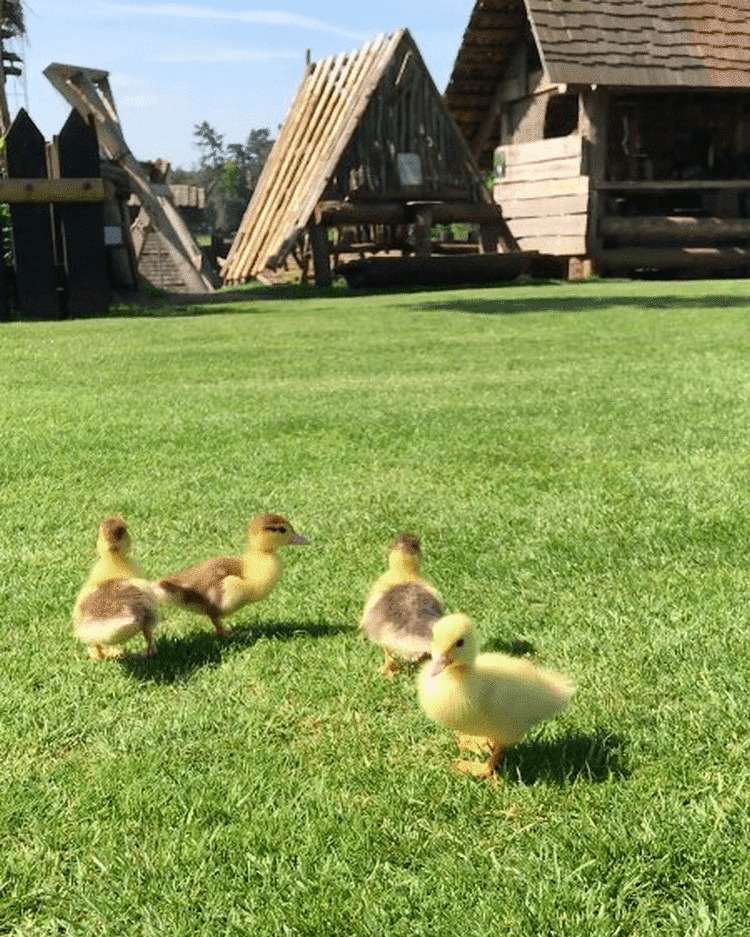 A duck built a nest near the castle, but unsuccessfully: soon after the ducklings hatched from the eggs laid, the insidious fox tracked down the mother and dragged her away for breakfast… The kids left alone got out of the nest and began to wander around the meadow in confusion, not knowing what to do next.

There they were seen by Fred’s owners and the Labrador himself. People were worried about what to do with the birds. After all, it is almost impossible for birds to survive at this age without a parent! But the dog has already decided everything. He gathered the kids and led them along. 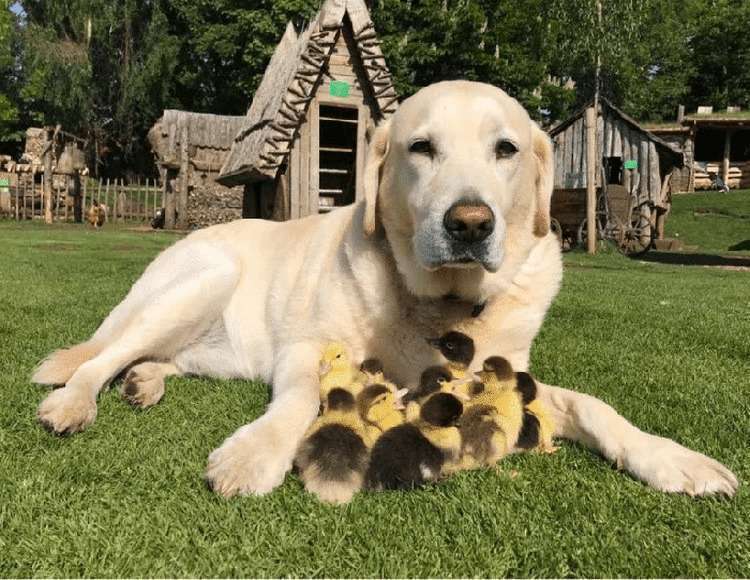 Since then, Fred has not left the nine ducklings. He rides them on himself, warms them at night and even smooths the feathers with his tongue!

And recently Daddy began to teach his brood to swim. There is a moat near the castle, where it is very convenient to dive and cool off on a hot day! A smart dog seems to understand that ducklings can’t do without water, and therefore takes them to “swimming lessons” every day!

Of course, the Labrador is too big to be called a duck. However, the yellow babies do not notice the difference and love their foster father very much!

In the courtyard of the castle, you can often see such a picture: Fred slowly walks along the slabs, trying not to lose his precious cargo. Fluffy balls that have climbed on his back and are surveying the surroundings from a height! 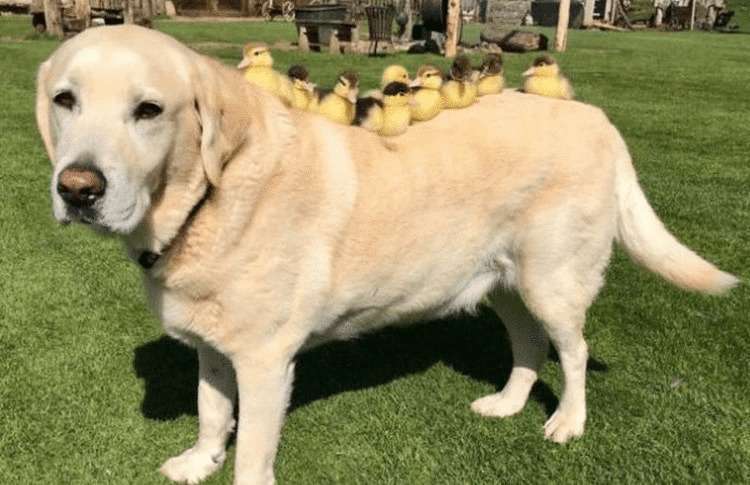 When a hard day’s work is over, Fred brings all the children to the basket in the kitchen, puts them together (and maybe counts them!) and he climbs there himself. They only sleep together!

Most likely, in two months, teenage ducklings will be able to take to the air. And then — as the heart or the pack will tell them, which, as people hope, will appear in the vicinity of Mountfitchet Castle by that time.

“We are very proud of our dog,— says Jeremy. “There’s no smarter Fred in all of England!”

Well, the dog is really wonderful.