A six-year-old resident of a town called Londonderry was playing near her home. Walking the baby saw a hole in the concrete slab. Sounds came from the hole. The interested child decided to see what was there. Looking inside the hole, the girl found there  a dog! 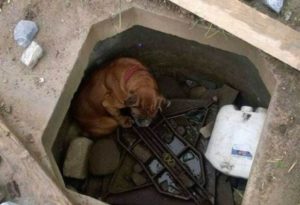 Apparently, the dog had accidentally fallen into the pit and now clearly needed help.
The animal could not get out on its own. The girl immediately rushed home, where she told her father about everything. A man named Kenny immediately followed his daughter to help an unfamiliar dog. 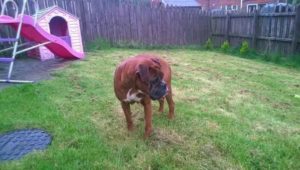 He managed to get the animal. It turned out that it did not fall there on its own: it was thrown out by the previous owner. Moreover, the boxer (the dog was thoroughbred) turned out to be blind and sick. Apparently, in such a barbaric way, the former owners simply got rid of the dog they didn’t need. The animal was transferred to a special center where volunteers helped the dogs. 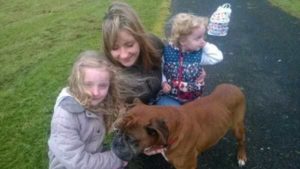 The center found out that the dog was used by the previous owners for breeding puppies. As soon as the dog got old and lost the ability to give birth to new puppies, it was thrown out as unnecessary. Among other things, she became blind and was ill due to multiple births. Despite all this, the animal turned out to be very good-natured and gentle. Under the supervision of doctors, the dog quickly went on the mend. 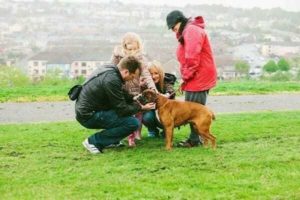 After the dog was finally cured, the shelter staff posted her picture on social networks, and also told the sad story of the old dog’s life. There were people who agreed to take the dog to themselves. They really liked the old, but kind and faithful dog that they took care of until the end of her life.

Giants among dogs:The 5 biggest and most powerful breeds
You can admire or dislike and fear dogs, but they have been with humans
ANIMALS 0 9

A boy is the only one to attend his grandmother’s funeral, despite her disinheriting him
Dorothy Hanks loved being around her grandchildren. Like all grandparents, she also wanted the
LIFE STORIES 0 17