A resident of Griffith, which is located in Indiana, Bob Holter did not even imagine what his usual trip to the store would turn into. 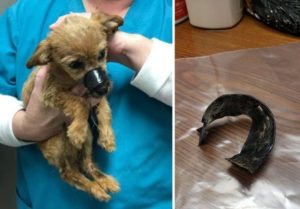 This story happened in January. Bob was sitting at home in front of the TV, and then he suddenly wanted something delicious. He decided to go to the store, which was 3 km away from his home. But at the last moment he changed his mind and went there on foot.

When Holter was walking across the bridge, he heard some sounds below. Stopping and listening, the man realized that someone was whining near the water. It was very dark under the bridge and nothing could be seen. At least Bob had a flashlight with him. Going down, he began to look for the unfortunate animal. After a while, in the beam of light, the man noticed a small, frightened puppy, whose muzzle was tightly pulled by black tape. 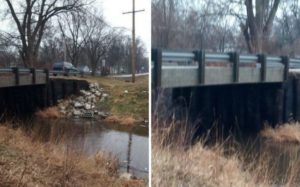 Without hesitation, Holter grabbed the baby and went with him in search of an open veterinary clinic at such a late hour. He and the dog were lucky to find Griffith Animal Hospital, where they were accepted. The man handed the crumb to the doctors, and he went to the store.

According to the veterinarians, the baby stayed with the tape on the muzzle for several days. The ribbon was tied with such force that there were even purple marks on the baby’s skin. And the baby turned out to be very thin. And if it hadn’t been for Bob’s appearance, the baby would have starved to death. 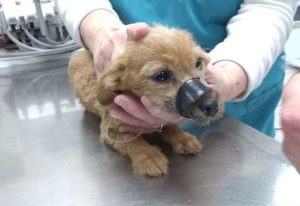 Later it was discovered that one of the puppy’s paws was broken. It must have happened when the baby was thrown off the bridge.

Clinic manager Lori Kovacic claims that in her 30-year practice she has not encountered such a manifestation of cruelty to an animal. The woman posted a post on Facebook about the unfortunate dog. Spouses Mary and Doug Whitting were so imbued with this baby that they decided to «adopt» him. Moreover, their elderly dog recently went to the rainbow. 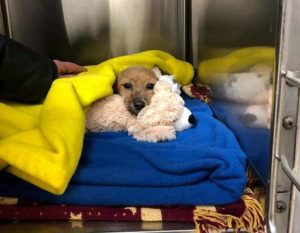 The couple took the baby immediately after recovery. They gave him the name Louis. After a while, Bob Holter decided to visit the baby he had saved. The man was very surprised when Louis recognized him, began to spin around his feet, jump high and wag his tail with joy.

Bob is happy for his furry ward. Now he has a kind loving owner and a roof over his head. 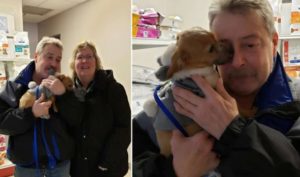 This kitten, who survived the fire, never thought he would see his mother again
Mason disappeared after hearing an explosion in the middle of a forest fire. His
ANIMALS 0 34