A volunteer organisation received a message from a girl in which she spoke about a dog living in a bedroom community. According to the girl, the animal could not walk and, in order not to starve, crawled to the butcher’s shop every day in the hope that someone would give it something to eat.

The girl started feeding the dog and in the evenings the dog would crawl into the porch of her house to get warm. The residents did not like this neighbourhood, so one evening the animal was thrown out into the street, despite the bitter cold. 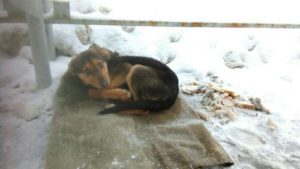 The dog was lying on the snow, curled up and breathing heavily, but people were passing by indifferently.

When the volunteers arrived, the dog was barely breathing. The animal was immediately taken to the vet, who sent it for surgery.

The dog was saved and when it got better, it was sent to a shelter where it has been for more than a month. He has recovered, but one leg has still not bent, which is not preventing him from walking or running. 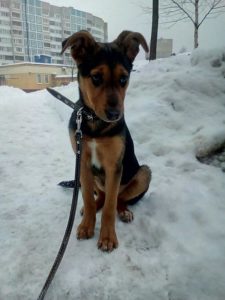 We are trying to find owners for him, but so far to no avail. We have not even been able to find a foster person to visit, socialize and walk him.

The dog suffers from loneliness and feels miserable, even though he has never harmed anyone.

It is a very clever and kind dog, which loves affection and responds in kind. We hope that a family will be found for him very soon, and they will be able to appreciate this wonderful dog.