We want to tell you about the liger, the result of an alliance between lions and tigers. These animals were bred by man. They would never have appeared in nature. Ligers are bred in special centers or zoos, where the weight of the process is controlled by scientists. But even with such a situation, the chances of an animal being born do not exceed 2%. That is why ligers are a real exotic. 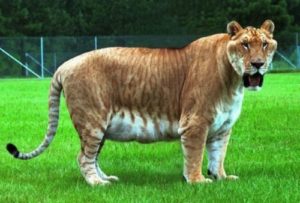 These cats have an unusual appearance. But it’s not their appearance that impresses most, it’s their size. Ligers are larger than any other feline known to man. In addition, they grow at an extraordinary rate, often gaining one kilogram every day. 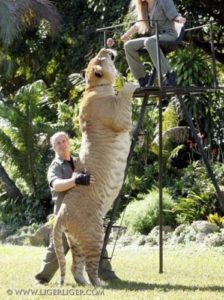 The largest of these unusual animals is Hercules. He was born in the United States, in a specialized institute. The lion Arthur and the tigress Ayla, were in the same enclosure, and as a result the liger was born in 2002. 4 years later the animal officially became a record-breaker. Indeed, even then he was larger than all known felines. That record is still valid. 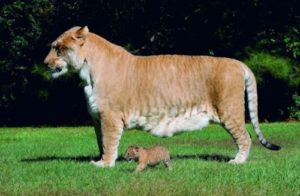 The size of the cat is really enormous. Its weight is more than 400 kg. At the same time, it is very active and is able to cover about 80 km in an hour. Its body length is 3.7 m, which is an order of magnitude greater than the parameters of an adult lion. Scientists say that Hercules is in great shape thanks to a balanced diet. His diet includes 9 kg of meat daily. If the animal ate as much as it wanted, the weight would show much more. 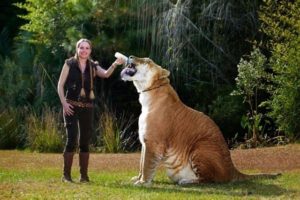 Hercules lives in Florida. He performs for the audience and delights them with unusual stunts.