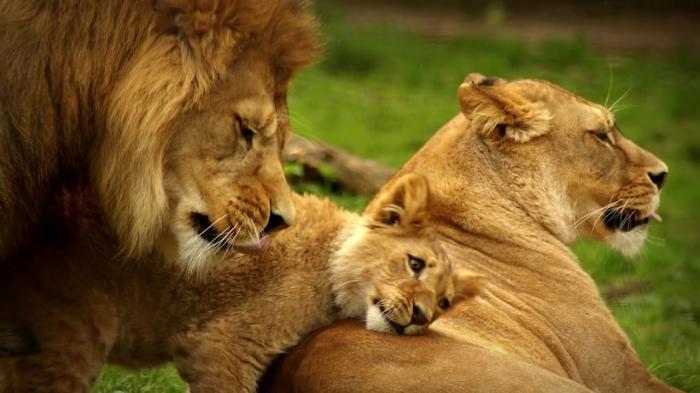 A touching story happened in a family of lions living in the Mikumi National Park in Tanzania. Wild animals behaved better towards their relatives in trouble than some people sometimes behave. Pride spent three years nursing his brother, chained in a metal «collar».

Tourists first noticed the wounded lion back in 2009. The neck of the animal was squeezed by a garrote made of iron rods, into which the young lion fell as a cub, having fallen into the trap of poachers. — Hunters set traps for small animals — such as the impala antelope. Most likely, the curious lion cub stuck his head in there and broke free with a wire loop around his neck,» said William Mwakilema, senior keeper of the reserve.

Over time, the young king of beasts became a real hostage of his shackles. Every year the wire dug deeper into the lion’s neck, condemning him to a long and painful death from suffocation.
There was a metal garrote on the animal’s neck for three years — After the first signal that our pet was in trouble, we made attempts to track down and free him. But the territory of our reserve is too large, and the temper of these animals is very cautious,» says Mvakilema. — So the lion survived only thanks to the care of his relatives.

According to the employees of the reserve, they were all struck by the behavior of wild animals. The brothers and sisters of the wounded animal supported his strength by bringing him food from hunting.

«They didn’t kill him, as they usually do with weak males. On the contrary, the lions did not let him die all this time, while people were powerless to help,» the caretaker added.
The caretakers were able to track down the lion and free him from his shackles. 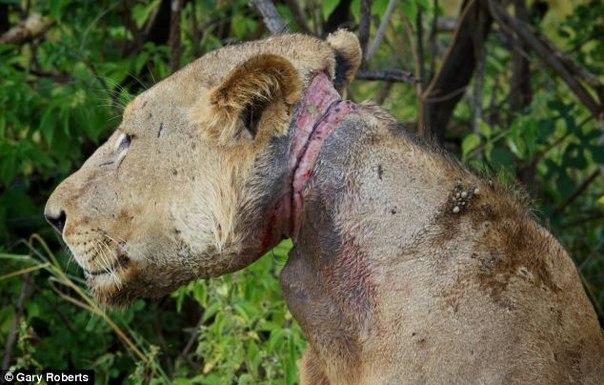 Together, rangers and tourists were able to track down the dying lion only in August of this year. Veterinarians were immediately called to the place, who put the sufferer to sleep for a while to help him.

— It was a very dangerous procedure. Five of our patient’s brothers were protecting their relative, so we had to drive them away in jeeps. As a result, we managed to remove the bars from his neck. The damage was so deep that if we hadn’t intervened, it would soon have been too late,» William Mwakilema said.
The rescued lion was reunited with his family

After treating the wounds, the people left Leo to recover in the circle of his devoted family. A few months after the rescue operation, the recent prisoner of the poaching garrote was again noticed in the vastness of the reserve.

According to the keepers of the reserve, the lion has almost completely recovered. A mane finally began to grow on his neck and head. And now only deep scars remind of terrible wounds.

The owners left the dog tied to a bus stop. But he managed to find a beloved owner and a new home
People have different attitudes toward animals. For some, they are just another toy that
ANIMALS 0 103