June and Waffel live a very friendly life, even though they are a raccoon and a dog! The pets play and enjoy themselves together, and their lives seem cloudless! 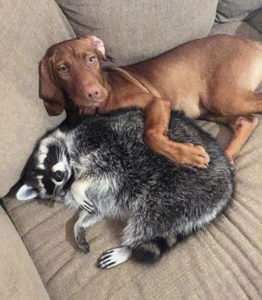 Little June burst into Bettany and her husband’s lives completely out of the blue. One day her husband came home from work and said there was a small animal lying in the yard. Bettany was terribly surprised and went out to see this miracle.

There was a baby raccoon lying under the tree, and its mother was sitting on top of it. At first the husband and wife thought the «parent» would come down to get the baby, and quietly left for dinner.

When Bethenny returned, the fluffy lump was in the same spot!

Apparently its mother had no intention of taking it back. Frozen and hungry, it was making a pathetic noise, and the woman decided to take it in.

The baby, named June, grew by leaps and bounds and became a furry «hurricane» as she grew older.

She was incredibly agile and curious, so she diligently began to explore the home of her rescuers. 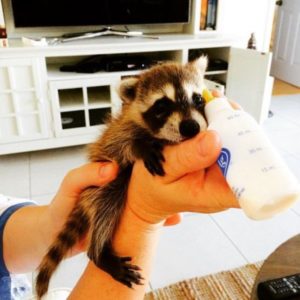 June is always found in the closet, in the desk drawer, or in the washbasin. The little girl pokes her sharp nose in the window and out the door to see what’s going on there.

The furry pet enjoys splashing in her owners’ pool, washing her paws and everything she sees under the tap.

As befits a raccoon rash, she merrily splashes water when she gets to it.

ANIMALS 0 82 views
This fragile little cub was spotted outside a market in Bali. Its thin skin