Sarge, a friendly Labrador retriever, who lost his sight due to an eye infection, got lost in the Santa Cruz Mountains. The last one, who saw Sarge, was his owner, Berth Cole. According to her, he ran away from their home, and then it was impossible to find him. 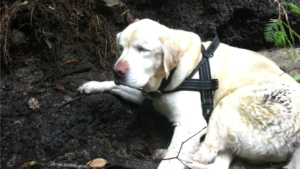 Her heart was just broken. Many people joined her in helping with the long search. She not only informed the authorities of the dog’s disappearance, but also posted on social media pages. After a few hours of searching, Berth lost hope, realizing her dog was missing. They tried desperately to find Sarge, even though there were tracking dogs involved, but the efforts yielded no results, Sarge was not found anywhere. 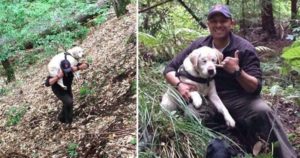 Thank God this story has a happy ending. After eight desperate days, a miracle occurred. Cole’s neighbor, Dan, while walking with his friend, accidentally found the missing dog.Dan, whose specialty is firefighting, noticed the poor dog lying on the ground. His head was in the creek. 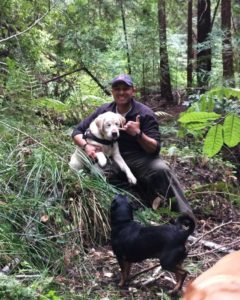 At first he thought the dog was not alive, but on getting closer he discovered that Sarge was, fortunately, alive. Then this kind man put the exhausted dog on his shoulders and took him home. Berth was so happy to see her missing dog found and alive. With tears in her eyes, she hugged everyone. 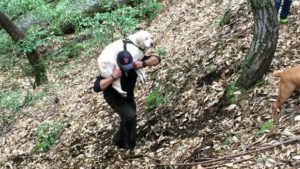 But until now, no one can explain how this blind dog was able to survive all those eight days. It is still a mystery. Probably, Sarge had a strong will and never lost hope. Watch the video below about this miraculous story here: