The cat named Hercules was an adorable, domesticated fatty who very rarely went outside. When the owner of the animal became ill, he needed serious treatment and the man had to go to the hospital in Canada. Hercules remained at home under the care of a woman who was supposed to come and feed him. The cat didn’t like the  “pet sitter,” so, one day, he just ran away.

Hercules had never lived outside, so he did not know how to get his own food. His excess weight prevented him from hunting rodents and birds.

The cat didn’t despair. He found a hole in a woman’s garage and climbed in. There were bags of dog food in the garage, which the cat began to eat. For six months, the cat would sneak into the garage day after day to eat. The cat could continue to live like this, but the unlimited food supply had a bad effect on his figure and he gained weight. One day the cat tried to get out through the manhole, but it failed. He got stuck. That’s when he was discovered by the owner of the garage, who finally realized why the food for her pets began to run out so quickly. The rescuers called by the woman removed the cat from the hole and took him to a shelter. 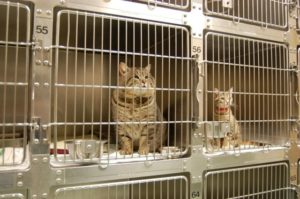 The adventures of the fat cat interested local journalists and they filmed a story about him, which was shown on television. Hercules’ owner was already home by that time. The man was very upset when he found out that his pet had run away. After seeing Hercules on the news, the man immediately went to the shelter. He brought a picture of the cat with him to prove that it was his pet. Hercules went home the same day. 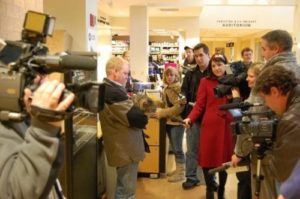 The cat spent only one night at the shelter. But he and his owner returned many times to help and sometimes just to cheer up the staff and their pets. 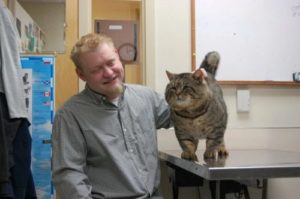 Hercules is no more. And his owner no longer lives in this town. But the locals still tell this story, which has long been a sensation for the small town.