The Niagara County SPCA officer who helped rescue an abused puppy will now be adopting the puppy. Officials say 6-month-old Hemi was taken from his home after an anonymous caller reported that there were two dogs in the backyard that were in bad shape. The two unfortunate dogs’ names were Forein and Hemi. Forein was injured and unable to stand on his paw. 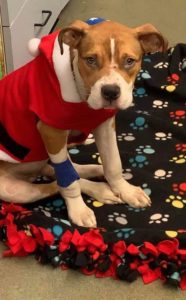 Hemi, the other dog, was emaciated, dehydrated, and could barely walk! Officials said that Hemi’s back leg was so swollen that the officer had to carry him in his arms.

«It’s sad to think that Hemi is just a baby. And just this kind of abuse is all he knows. But we assure you that from now on his life will get better.» Please pray for Hemi and his friend for their speedy recovery,» the message said.
The news reached online users and a fund was started to help. Then came the great news! The officer from the SPCA who helped save Hemi adopted him. Forein also found an owner for him. They are both on the mend.

At the age of 7 years the girl easily lifts a barbell weighing 80 kg
At any given time, in different parts of the world, children emerge who are
LIFE STORIES 0 71

Barley turned into a gorgeous cat literally from a skeleton
On the way home with his son Toby, Davy Gallant, who lives in Quebec,
ANIMALS 0 6