The appearance of a dog in a police station is hardly a surprise to anyone, because these beautiful animals work there on a par with humans.

However, Fuzz, who is a service dog, is somewhat different from his fellow officers, because he does not bite criminals’ heels and does not look for cocaine at the airport. Officially, Fuzz’s position is called “Officer Hugger” and has nothing to do with biting people – it’s exactly the opposite. 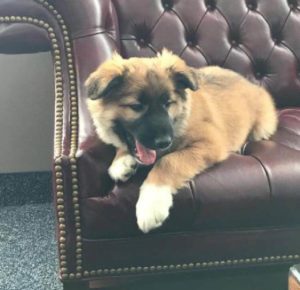 A stray dog had been walking around the farm for days with her puppies. Catherine had to pick up the animals from there and ended up even taking one of the babies, which she later named Fuzz.

Since the chief’s dog, Stella, was brought to the police station on Fridays, everyone thought that Fuzz could be invited to visit as well. Since employees often face stressful situations, and all their work is difficult to call light, they periodically needed an emotional release. And Fuzz was able to help them!

When police officers needed a break, they went to cuddle with five-month-old Fuzz and stroke his fluffy tummy. 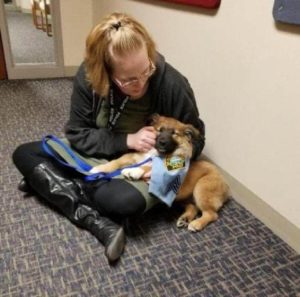 It turned out that Fuzz is a great stress reliever, so they even decided to hire him as a “cuddling officer. The puppy works about 10 hours a week, while his owner is also on duty.

While on duty, Fuzz is busy doing very important things – he greets the staff, plays with the ball and cuddles with everyone. 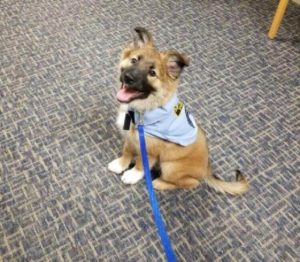 Colleagues describe the dog as an extremely responsible employee:

“As soon as someone approaches him, he immediately lies down on his stomach and asks to be petted.”

Thanks to his diligence, Fuzz was even promoted to the rank of sergeant.

His bosses paid attention to Fuzz’s ability to improve people’s moods and even plan to enroll him in special pet therapy courses. 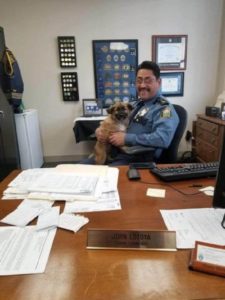 “Our hope is that after the training, Fuzz will be able to help not only the members of our department, but also other people,” said his supervisor, John Lozoya.

We hope that Sergeant Fuzz will be successful in his training and become a professional therapy dog.