It was raining, but the cat had nowhere to hide. It just sat in the street. The cat was spotted in the morning, and in the evening it became clear that during this time it had not moved at all. The round belly indicated that the cat was about to become a mother. 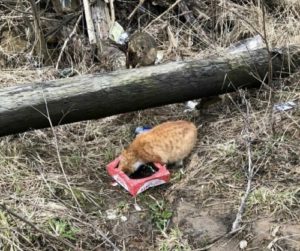 I was told about this cat the day before my birthday. And the next day, congratulating me on my birthday, my friend told me that she was standing outside with a cat in her arms, but she could not take it home. There are already a lot of unsettled cats in the apartment as it is. Therefore, her family is strongly against having another one. 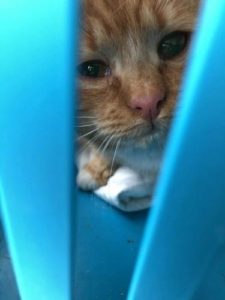 Instead of celebrating, I went to get the cat. Locals say the cat had a owner, but she was gone. And her relatives sold her house. The cat went to live in the barn. But once the new owners moved in, she could not stay there. The dog of the new tenants was aggressive towards the cat and would not let it not only into the barn, but also into the yard of the house. 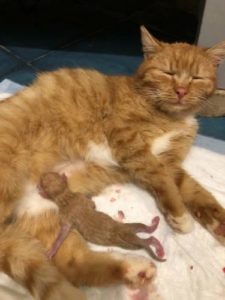 The cat started living on the street and came to the road every day to beg for food from passersby rushing to work.

I took the cat to the vet. He did an ultrasound and confirmed that it wasn’t long before the birth. The cat gave birth soon after, but the babies did not survive. The vet said that the kittens came early, so they were too weak. Mastitis was added to the cold she had earned while living outdoors. The doctor prescribed injections. 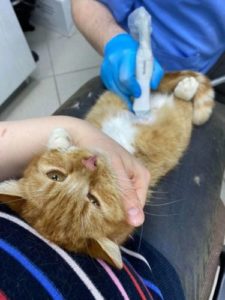 So far, the cat is in isolation. She is affectionate, loves both people and her cat neighbor. The girl really needs a loving family.