All dog owners love their pets, but not everyone knows how to do it right. And only a few are able to cope with difficulties. Most, like the former owners of a retriever named Kai, don’t want to bother at all and take responsibility. So when the dog became overweight, they simply decided to put him to sleep.

This is Kai in the past. As you can see, not a skinny dog. 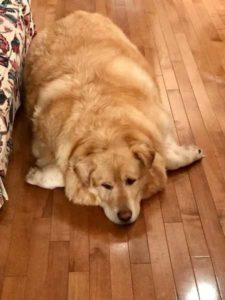 Kai was not simply fat, but neglected fat. This means that for years on end, no one paid any attention to the dog’s condition, and he became thoroughly ill. For example, Kai could not walk at all. He would fall to the ground without energy after ten steps, and breathe heavily, as if for the last time. He had to climb the small staircase to the pound for half a dozen stairs for twenty minutes! Not surprisingly, the previous owner just decided to get rid of the fatty. But he was interrupted by veterinarian Pam Heggie. 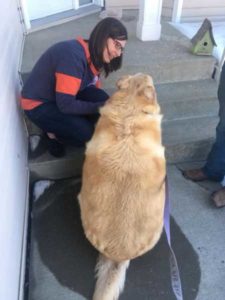 Kai considered himself doomed. No one had ever taught him to fight for himself. The dog was too used to trusting people. And he was very lucky that Pam noticed that pleading look. She had arranged for medical custody, taking Kai under her control until he recovered. The first weighing everyone was horrified – almost 80 pounds! This is at least twice the norm for the breed, that’s why all the problems. Many seriously advised not to torture the dog and put it to sleep. But Pam knew how to help Kai. 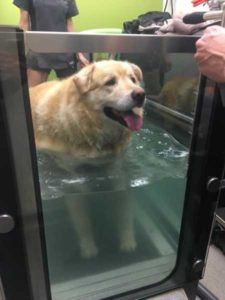 She started with water therapy, walks in the pool, where the weight wasn’t felt as much. Then they started taking Kai for walks in the garden, three times a day. Of course, a strict diet. And the dog began to transform. Not only did he lose weight, but he also changed his attitude toward people. For example, he learned that he can play, not just sit under the table! And a year later Kai was no longer recognizable. He lost 40 pounds and became a handsome dog with kind eyes! 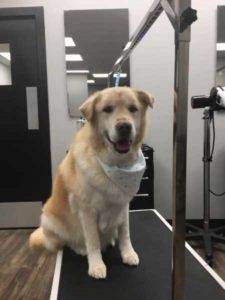 In the end, Pam became so attached to Kai that she decided to keep him. Although there were plenty of people who wanted to take the healthy, handsome retriever. But no – Kai is now Pam’s own inspiration for her work. The dog has changed completely, and now helps her nurse other animals. 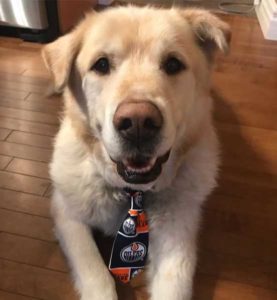