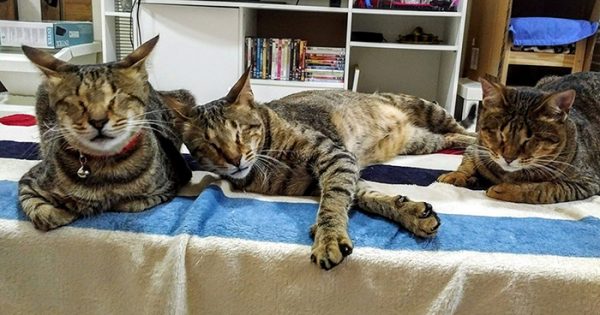 On Christmas Eve, three kittens were found in an abandoned warehouse in Dubai. They suffered a severe cold and completely lost their sight due to conjunctivitis. The kids were taken to an animal shelter. The volunteers named the cat Blue, and his sisters Willow and Meadow

First, the neighbor of the former owner of the animals took Blue to himself. But the cat missed his sisters very much and had to be returned to the shelter.

The confused kitten could not live without his sisters. He screamed all night long, trying to find them all the time 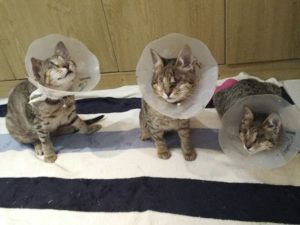 The blind cats lived in the shelter for more than a year and could no longer stay there.But there was a woman who was ready to take all three of them to her—Catherine Magno.

“I have not had such an experience. But their story touched me to the core.I couldn’t bear the thought of them being put in a cage and used for experiments, or worse.” 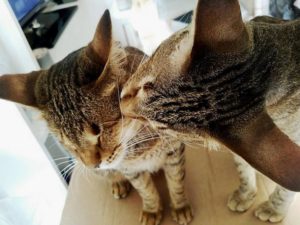 At first, Catherine was afraid of the difficulties that might arise with her blind pets. After all, other cats already lived at her house.

“I was scared.Because in all the articles about caring for blind pets that I read, very overwhelming things were written. But I took it all as a challenge.” 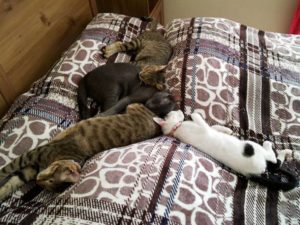 But soon the woman saw that Blue, Willow and Meadow had settled into the apartment, they were well oriented and playing with each other.

They also found a common language with Catherine’s other cats. A year later, the woman believes that kittens are practically no different from healthy animals. 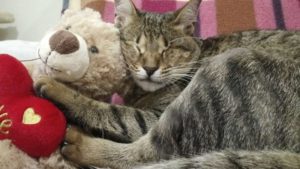