Meet Alba, a Bornean orangutan; with its white fur and piercing blue eyes, it is the rarest and most unique ape in the world.
Alba is the world’s only albino orangutan. She was rescued from her cage and released back into the wild in 2017. 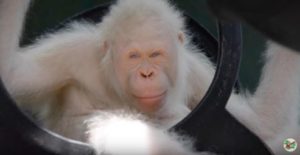 Her uniqueness is not only beautiful, but also dangerous for her, as she is an obvious target for poachers and wildlife traffickers.

Unfortunately, like all albinos, the Alba is more prone to skin diseases as well as hearing and vision loss than its pigment-rich brethren. 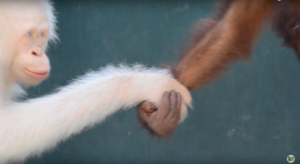 The Borneo Orangutan Survival Foundation fortunately took steps to ensure her safety. They published her story and spent months raising funds to buy Alba her own island, as she would never be safe in her former home.

Her story was widely publicized, and after raising $80,000, Alba’s dream became a reality. The foundation purchased a remote island that became a refuge for Alba and three of her friends. 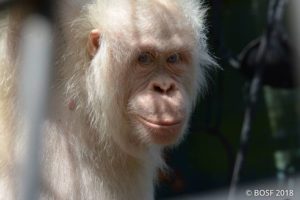 The 25-acre «forest island» is surrounded by a dense system of canals and jungle. The BOS provides additional security as well as 24-hour surveillance of the animals’ health and behavior. 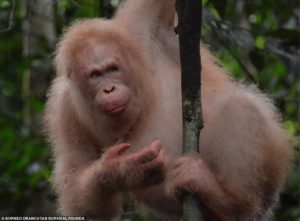 «The new forest island for Alba will be guarded around the clock. Security officers will patrol it regularly.

The sanctuary initiative also involves the cooperation of local authorities and communities. Thus, we can say with confidence that Alba will be well protected on its forest island.» 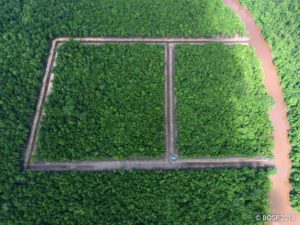 Because Alba was taken from the wilderness when she was a baby, she missed the opportunity to learn some of the techniques necessary for survival.

So she will undergo forest training and socialization sessions to learn her instincts as children learn from their mothers.