The dog had a monstrous wound on his neck. But in spite of this, he was able to run several dozen kilometers. The strength did leave the dog. He collapsed. True, by then fate had just brought him to the doorstep of the house where the volunteers lived.

On Saturday I received a message: “The dog came running, he has a collar, but it is practically grown into his neck. It’s bleeding from underneath. We couldn’t cut the collar off, we really want to help, but we have no idea what to do.”

We wrote about the dog in a local public forum, thinking that the owners might be looking for him. We had a faint hope that the owners would be found, but this dream was not destined to come true. 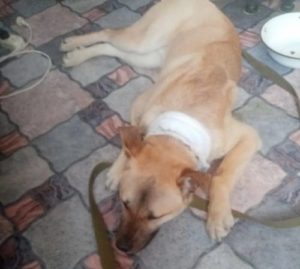 There was not a word from the dog’s owners. But the post was seen by a girl who helped to bring the dog from the village to the city and show it to the vet. Already at the clinic the collar was removed and the animal was treated.

The dog stayed with the girl for the night. The dog turned out to be smart – it understands what is wanted from it. And in general, tries not to cause people unnecessary trouble. The dog was walking without a leash, because the collar hurt him. 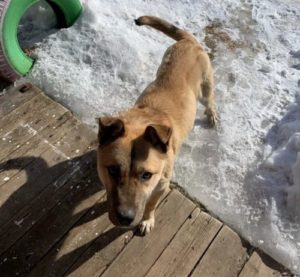 Soon the girl wrote that the dog had been picked up by a good friend of hers, and we could only rejoice that everything had turned out so well.

The peace of mind turned out to be temporary. Someone posted that he had seen the dog and that he had a wound on his neck that was bleeding.

The description of the dog was similar to ours. 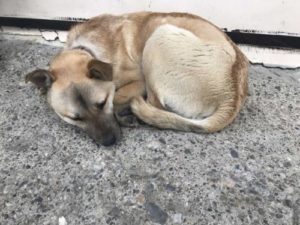 A few hours later a volunteer, Alla, called and said that there was a dog with a wound on his neck near one of the entrances of her house. It turned out to be the same dog. This time it has again lost its strength near the house where the volunteer lives.

The appearance of the dog in this place remains a mystery. How did the dog run several dozen kilometers with such an injury? Almost at the same time he was seen in several different areas and we have no explanation for this fact. At the same time, the dog is very lucky. After all, his strength leaves him not far from the homes where our volunteers live. 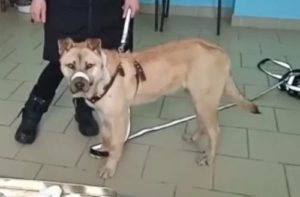 We found the dog and took him to the doctor. After medical attention, the dog got better. He went to the shelter. The dog was given the nickname Ray. It suits him very well, because the dog is kind, smart and affectionate.