People found a wounded owl and decided to take it home until the bird recovers. Every day owl and people trusted each other more and more.

Joshua and Lisdy were walking around the neighborhood when they noticed an owl next to the road. The bird just sat in the grass and did not try to fly away. People noticed blood on the beak and realized that the owl was injured. She may have been hit by a car or attacked by another animal. Joshua and Lisdy couldn’t leave the bird in such a state, so they took it home. 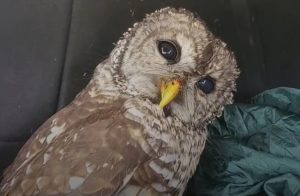 Surprisingly, the owl did not try to resist when Joshua wrapped her in a soft blanket to treat the wound on her beak. Having found no wounds on the wings, people were glad. The owl will be able to fly as soon as it returns to normal.

But for the first couple of days, the bird refused water and food. This worried Joshua and his girlfriend. They named the owl Coco and continued to take care of the forest friend, offering her various treats. When the owl took the first sip of water in a couple of days and ate the treat, Lisdy and Joshua were very happy: the bird was getting easier. 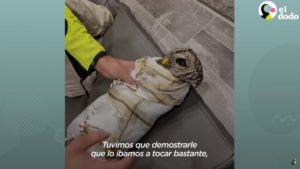 But Joshua and Lisdy decided not just to release the owl, but to build her a tree house where she could always return. This place could have served as a shelter from the weather if Coco hadn’t found a better option. Although in their hearts people did not believe that Coco would take it. But again, the bird surprised new friends. She not only began to visit the house regularly, but also flew to Joshua and Lisdy, watching them from the top of a tall tree.