When it comes to animal heroes, the first thing we think of is dogs. They serve in the army and the police, they catch criminals and save people in the mountains… But it turns out that cats are just as heroic as dogs, and in a difficult moment a cat can save its owner’s life! Who are these hero cats?

Pudding, a 10-pound cat, didn’t find happiness right away. He wandered around shelters for a long time, and finally in 2012 he was taken into the home of Amy Jung, who lived with her son Ethan in Sturgeon Bay, Wisconsin. What they didn’t know was that Pudding would soon save Amy’s life.

Shortly after the cat moved into the house, Amy, a lifelong diabetic, had an attack of the disease right in her sleep. Pudding was the first to sense trouble and rushed to the aid of his new owner. He pawed her and bit her face until she regained consciousness enough to be able to call out her son’s name. But Ethan, asleep in his room, did not hear her. Then Pudding ran into Ethan’s bedroom and began to gallop around asleep. He woke Ethan up until he was awake and rushed to his mother. Ethan called the paramedics and, thanks to Pudding, they managed to save Amy’s life. The family has considered him a hero ever since. 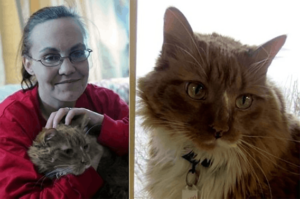 It was a beautiful sunny day in Bakersfield, California, and four-year-old Jeremy was walking safely in front of the house. But a neighbor’s dog came at the boy from behind a car. It knocked the boy down and pinned him to the ground. Luckily, Tara the cat was nearby. When she saw the dog attack the little owner, she did not hesitate to rush at the dog. From the surprise of the attack the huge dog rushed to run — and Tara chased him all the way to the gate of his house, only to return home with a proud look of a winner, to the deserved caresses. 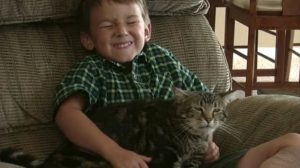 Australian cat Sally rescued her owner during a fire. When late one night in January 2014, her owner Craig Jeeves was already dozing while lying in bed — when suddenly his cat Sally started acting crazy. Normally calm, Sally jumped on the bed, meowed loudly, and shoved Craig with her paw until he woke up. It was only then that he realized the house was ablaze. He grabbed Sally, ran out into the yard, and immediately called the fire department, who arrived just in time to save the neighboring buildings from the fire.

A terrible thing happened to the family of Angelica Sipe of York, Pennsylvania. Someone fired a shot right in the front yard of their house, and the bullet went right through the window and into the bed where the boy was sleeping. When Angelica woke up and realized what happened, she, freezing, rushed to her son and looked for blood on his body. But blood was only on the body of their cat Opie, who was lying next to Angelica’s son — and took the bullet himself. The bullet hit the cat in the head, went through the chest and out the armpit. The boy sustained no injuries.

Contrary to predictions, the rescue cat survived! The owners did everything they could to heal Opie, and thanks to their efforts, the cat is now feeling well again. 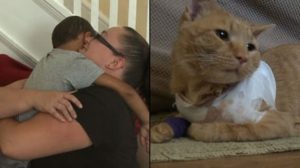 The mysterious rescuer from the Swiss Alps

This story happened to a hiker in the Swiss Alps. While hiking in the mountains, the man hurt his ankle. He made a hasty decision to return to his hotel, but he soon realized that he could not remember the way. To spend the night in the mountains with a sore foot would have been pure suicide. But what could he do if no one was around? And then a black and white cat came out from behind another ledge and, without saying a word, confidently moved forward somewhere, with a persistent meow as if inviting the lost man to follow. It was at least some hope for him to get to the hotel before dark, so the hapless tourist followed it. What was his amazement when the cat, without once hesitating, led him to the familiar places, and then disappeared as quietly as it had appeared. The rescued man, who reported the incident to the Web, never learned her name — but will undoubtedly be grateful to her for the rest of his life. 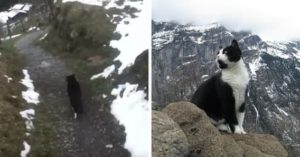 Jack, a cat from Milford, New Jersey, was resting in his backyard when a grizzly bear broke in. But the owners didn’t have time to be frightened: seeing a wild animal, the cat jumped up and swooped down on him. He was so furious that the frightened bear quickly climbed up a tree and sat there while Jack, howling menacingly, wandered down. When the frightened bear tried to escape, the cat immediately chased him up a second tree! In general, the help of rescuers was almost needed by the grizzly himself.However, Jack’s owner, Donna Dickey, wasn’t the least bit surprised, explaining to local reporters, «Jack just can’t stand strangers showing up in his yard!» 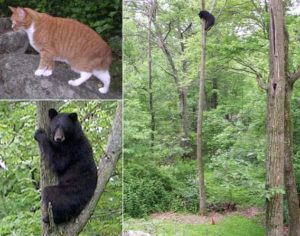 In December 2011, Leo, a three-year-old Bengal cat, saved the home of his owners, John and Sue Higgins, in Crawley, West Sussex, from a burglar. The intruder broke into the house late at night, when everyone was already asleep. But his quiet footsteps heard Leo — and howled so that not only woke up the owners, but also the neighbors. True, they could not detain the burglar: hearing a chilling howl, he fled from the house without taking anything. And Leo was awarded a Medal of Heroism for his heroic deed by a major British manufacturer of cat litter. 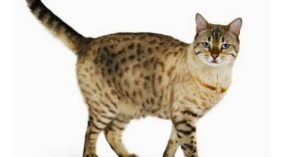