The weather outside that day was cold and rainy. One of the residents of the apartment building decided to throw out the garbage. She heard meowing near the containers. The woman was not indifferent and started looking for the place where the meow was heard.

She was dumbfounded when she realized that the crying was coming from a trash can with a cardboard box sealed with duct tape. The woman took the box out and opened it, very agitated. Inside was a cat without eyes and seven kittens. The kitty raised its head and began to breathe in air greedily. Of course, the woman couldn’t leave her mother and her babies in the street and took them to her barn. Even though it wasn’t a house, but it was dry and warm and no one would harm them. 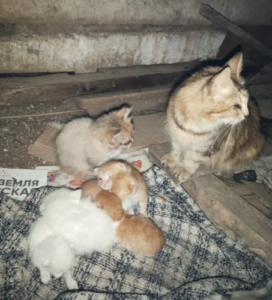 Then the rescuer reported her find to the volunteers. They came and took the family of cats. The first thing the volunteers did was to take the cat and kittens to the vet clinic. 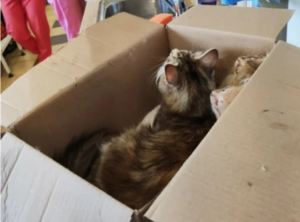 There the vet examined everyone and took tests. The kitty turned out to be very trusting and affectionate. It also turned out that the mother cat had a congenital eye defect. This meant that the cat would not have survived on the street, which meant that she was domestic. Tests showed that the cat and some of the kittens had an infection. In addition, the kitty was diagnosed with mastitis. She was not allowed to feed her kittens any further and a course of pills was prescribed.

After this story was published on social networks, many people began to help with money. And there was also overexposure at home! 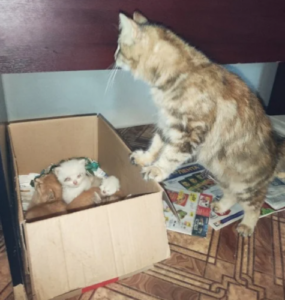 The people who agreed to take in the cat family already had experience nursing babies and sick animals. That’s why they agreed to do the treatment themselves. Volunteers only needed to bring medications, food and litter box filler, take them to the vet for check-ups and start looking for owners. 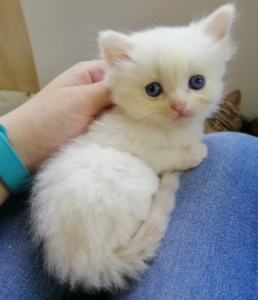 The kittens are all grown up now, and the cat is going to be spayed. 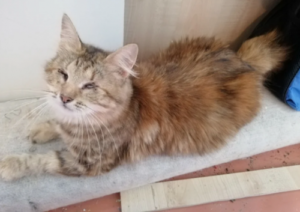