This is the story of a cat and her daughter. They arrived at the shelter in early fall. The couple brought the animals to the shelter. The staff refused to accept the cats right away, however, because the shelter was overloaded. The couple argued with the staff for a long time, accused them of callousness and indifference and then left with the cats.

Several hours later, one of the employees passed by the dogs enclosure and noticed a carrier standing nearby. A cat and her kitten were sitting in the carrier and both had tears coming out of their eyes. The volunteer immediately identified the cats that the scandalous couple had tried to give to the shelter. 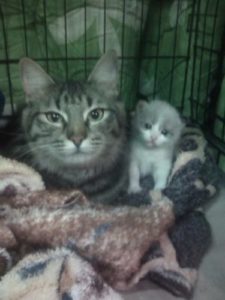 There was no room for cats in the shelter. But they couldn’t be left outside either. A family of volunteers decided to take the cat and kitten to their house for a while and put them in the garage.

Mother and daughter were complete opposites in appearance. Volunteers did not immediately believe that the cats were close relatives. But as soon as they saw the cat taking care of the baby, they discarded all their doubts. 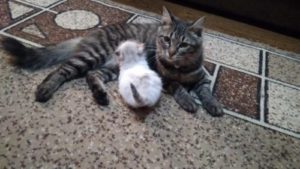 While arranging the cats in the garage, volunteers saw an adult animal crying. It was as if she realized that their owners had abandoned them. Scientists proved long ago that cats can’t cry. But from the outside it seemed as if tears were flowing from the sad eyes of the animal.

The cat and her baby were put in a cage and blankets were placed on all sides of their temporary shelter to keep them warm. The conditions for the animals were not ideal. But it was better than being on the street. 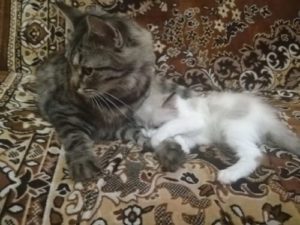 After a while, the cats were able to be placed in a holding facility. The cat and her daughter ended up at the home of a woman whom the volunteers know well.
The little one turned out to be very playful and active. When she became independent, the volunteers began to look for a home for her. But for a long time no one was interested in the kitten. 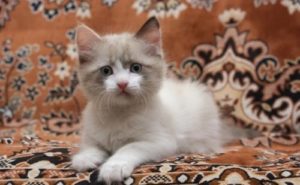 At the age of eight months, the kitten was spayed. The cats remained at the shelter. The woman who took care of the cats got so used to the girl that she did not want to part with her.

The mother cat was also spayed. And after a while, a family was found for her. Now the cat has loving owners and a cheerful company of a dog and another cat.