The Hill family from Melbourne, they are typical city dwellers who decided to take a big trip and hit the road across the country. They ended up stopping in Mataranka, in the Northern Territories, camping and close to wildlife.

Father and son went fishing, and Larissa, a 48-year-old mother, stayed in the cabin. She sunbathed on the veranda, then went to the bathroom, and when she came out of there, she saw this. 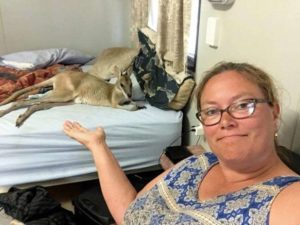 The wallaby, a distant relative of the kangaroo, was unceremoniously spread out on the human bed. And while Larissa was trying to figure out how dangerous the creature was and what to do, the cheeky marsupial began to tossing and turning, trying to get comfortable. Soon the wallaby dozed off, and the woman decided to leave it alone. It didn’t look like it was hurting her, and the sheet could be washed. So an hour passed, which the uninvited guest slept sweetly, and Larissa tried not to make any noise. 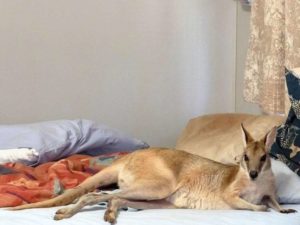 When father and son returned and saw the wallaby, their laughter quickly awakened the beast. Yawning unhappily, it got out and rode off on its own, as if nothing had happened.

Larissa, shrugging her shoulders, had to agree that this is Australia, there’s more what beasts do! At least it would be something to remember. 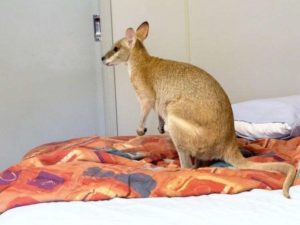