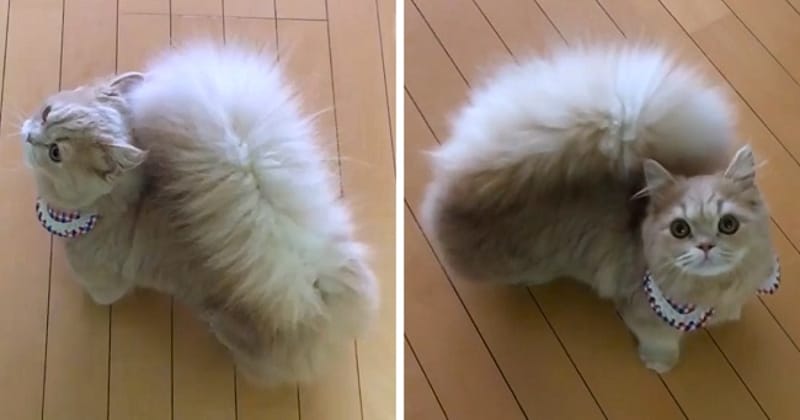 Meet Bell, a truly majestic cat with a tail so fluffy you probably wish you could touch to see how soft it is. Bell’s owner keeps other pets as well, so she is always surrounded by furry friends, whether they’re feline or canine. Just look at that fluffy angel kitty. Bell is super well-known for her beautiful squirrel-like tail. She belongs to the Minuet breed and surely has been blessed with an extremely fluffy rear end, along with very short legs and a round face, making her absolutely – GORGEOUS! Bell (and her magical tail) found fame when her owner made the Instagram account @ricorico_rico a few years back. Since then, her owner has posted 3,133 (as of writing) adorable photos of Bell and her friends followed by 155,000 cat lovers.

Thanks to Bell’s worldwide fame, this Japanese kitty has become quite a sought-after feline celebrity in the country. She’s appeared on several television programs and commercials since rising to fame. Another perk that she enjoys with her furry friends are the free pet care products companies send them! Minuet cats are also known as Napoleon cats. They’re bred from Persians and Munchkins. The Minuet breed is known for its amazing coat.

An interesting fact is that despite its short legs, a Minuet is able to jump, run, and play just as agilely as any other breed of cat. Napoleon cats are incredibly healthy: they have very few health-related problems. That’s mostly because Minuets were bred to avoid the various health defects that Persian cats have, such as the excessive formation of tears, the blockage of tear ducts, flattened faces, as well as fur coats that tended towards matting.