Mason disappeared after hearing an explosion in the middle of a forest fire. His mother thought she would never see him again. But now they are together again and dream of never parting again.

Mason is a beautiful gray striped kitten who was separated from his family because of a terrible camp fire in Northern California. Mason’s mother, Laci Ping, and her husband, Curtis Mullins, tried to get evacuated from the house with all their beloved pets. But Mason panicked when hearing an explosion from a nearby propane tank and fled.

The woman ran after the cat. But for safety reasons, the local fire department wouldn’t let her continue her search.

“He ran away, and my heart raced faster. I couldn’t find him. I immediately had the thought in my head that I would never see him again.” 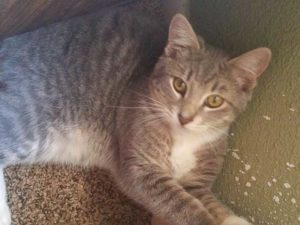 The couple was very saddened by what happened, not only because their house burned down, but also because they were no longer with their kitten.

They moved to live at a friend’s house with the rest of their pets. Ping decided to post a picture of Mason on social media in hopes of finding him. 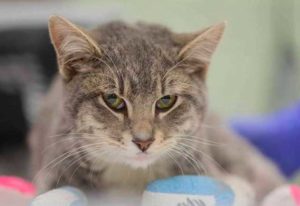 Pine said:
“I kept looking online, hoping someone might have picked him up. And then, a few days later, the University of California at Davis [School of Veterinary Medicine] published a list of found cats.” 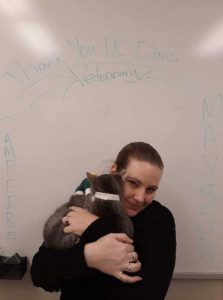 “I recognized him in the picture right away. I thought, `That’s my baby Mason.’ I knew it for sure.”

They waited impatiently in the clinic room when the vet arrived with the box. 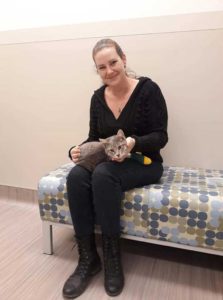 The woman couldn’t believe she had found Mason. They were both glowing with happiness. The cat clutched at his mother’s neck as she held him.

“He hugged my neck tight. He was so happy. I missed him very much. It’s scary to think what could have happened.”

Mason burned all four of his paws in the fire. But he’s already recovering and will be able to return to his family in a few days.

Meanwhile, firefighters are battling fires across the state that have destroyed about 11,000 homes, left 1,000 people missing and killed 77 people.