Natalia found the puppy outside her market pavilion. Coming to work in the morning, she noticed the little guy, who was just sitting in a puddle. The puppy was obviously well groomed and his mother obviously loved him. 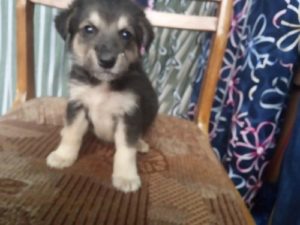 Natalia picked the baby up from the puddle and brought it into the pavilion. The puppy was clearly hungry. He was still very small and could not eat on his own. The girl had to buy baby food and feed it from a bottle.

When the baby had eaten enough, the question arose: where to send the baby next? He was too small for the orphanage. He would not have been able to get along with the adult dogs there. In addition, enteritis, dangerous for such a baby, was rampant throughout the city’s shelters. 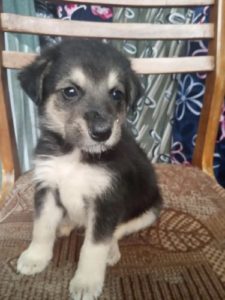 By the end of the day Natalia had not decided what to do with the puppy. But she knew for sure that she could not leave him on the street. The girl left the dog in the market pavilion all night to make sure that he would live through the night without any adventures. 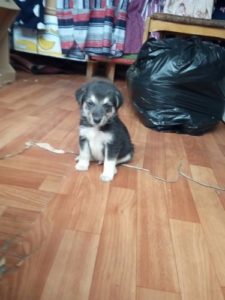 Now the puppy, named Daisy, lives in a pavilion at the market. Natalia is with him during the day, and in the evening he is all alone. At night, Daisy wanders around the dark pavilion, trying to find his mother. He often cries from loneliness and fear. But no one comes to comfort and soothe him.

In the morning, Natalia appears in the pavilion. She brings the puppy baby food and for a few hours the puppy has company. This allows him, at least for a short time, to get rid of the feeling of loneliness. 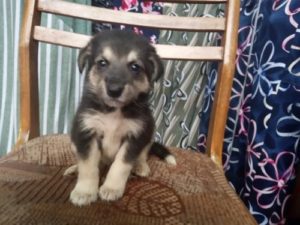 Daisy is still very young, but he has already had many trials in his life. When he was very little he was torn from his mother and left on the street helpless and defenseless.

Why were humans so cruel to the baby? Animals, just like humans, have a soul. They suffer too, they just can’t tell anyone about it. Throwing such a baby out into the street is the same as throwing a five-month-old baby out of the house and expecting it to take care of itself.