Every day there is a new story on social media in which the main characters are pets that manage to touch, amuse or outrage a large number of Internet users, depending on the situation.

Today we will tell you about Blue, a dog who was lost for 200 days until he was finally reunited with his owner, even when it seemed that all hope was lost.

The events took place at a shelter in Tennessee, USA, which was the home and refuge of this dog at the time he was separated from his owner.

Six months ago Pat, Blue’s owner, accepted a job offer in Texas for which he had to move, but before the trip his dog was lost. 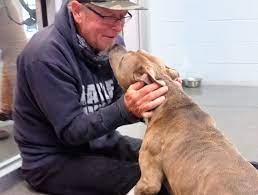 Despite an intense search and much effort in trying to find the whereabouts of his faithful four-legged friend, it proved impossible. So the man had to move, not knowing anything about Blue’s whereabouts and the conditions he had to go through, being alone and helpless.

However, the man was very relieved when, 200 days later, he received a call from one of his friends saying he had seen a dog that looked like his Blue:

“I saw a dog at the Washington County animal shelter that looks a lot like Blue… I’m sending you a video so you can look at it and see if it’s really him,” his friend said.

After seeing the images sent in by this man, Pat needed no further proof because he knew it was his pet, so he didn’t hesitate to get in his car and drive about 1,900, the equivalent of about 13 hours of travel time, to get to where Blue was.

Many were amazed and touched by the dog’s reaction when he saw his owner again. After all, in spite of the time he had spent without him, he recognized him almost immediately, demonstrating that the love of these incredible creatures is eternal. In addition, he did not fail to let him know that he was very happy to be near him, as he did not stop licking his face and wagging his tail. A video posted by the animal shelter on Facebook has caused more than one person to shed a tear.

“We don’t have many happy endings like this one. There were tears, tons of dog kisses and lots of smiles,” the post said.