This story happened in the capital city of Peru. The owner of a large dog brought her dog to the clinic for a routine vaccination. At the same time, Muni, a cat, was at the clinic and needed to be vaccinated as well. Except that the cat was so afraid of injections that he fainted at the sight of the syringe.

Muni noticed the dog being taken to the room where he knew they were giving injections. The cat decided to help the dog and followed him to the office, but he could not overcome his fear and cross the threshold of the office. Stopping at the door, the cat began to closely observe what was going on. 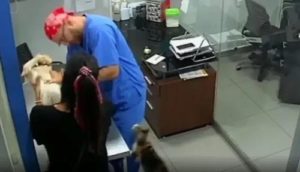 The dog was seated on the table and the veterinarian prepared to vaccinate him. Thinking the dog would be hurt, Muni was able to overcome his fear and enter the room. Then, after looking around, he proceeded to rescue the animal. 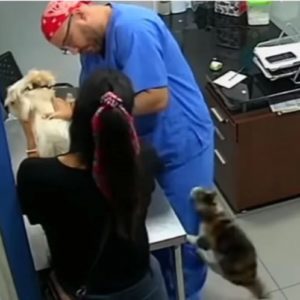 The cat rushed at the vet, clawing at his thigh. And then, having lost his courage, he unhooked himself and ran away. Of course, he wasn’t able to “save” the dog, but the cat became popular. After all, the clinic decided to publish footage of this funny incident on the social network. The comments praised the cat’s courage and his desire to save the dog, even though he did not need any help.

Husband teases wife for “eating like a pig” until one day he finds her passed out on the floor
Jenny had always been a curvy girl. She was a beautiful woman who enjoyed
LIFE STORIES 0 37