Only the born roe, rescued in the woods, was given the name Javelin.

The animal with the wound was accidentally found by a local hunter, who, decided to take the little roe home, as the mother was not in sight. 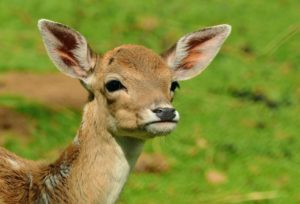 She could barely stand on her feet, but she already had a lively temperament and a good appetite. It was a newborn baby of a wild European roe deer. A local resident found it wounded in the woods and immediately took it to the hunter Alexander Kopersak.

“I saw that the leg was covered in blood. Where did it come from? I took the animal with me because it would have died if I had left it,” says Alexander Kopersak, a hunter from the forestry. 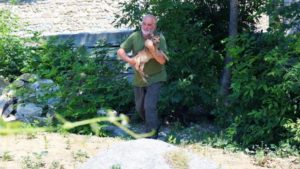 Alexander began to treat the baby. And after a week of treatment, the wounds began to heal.

Alexander’s son decided what name to give the animal. He recalls:

“He told me Javelin, and I looked at her and said Bayraktor, but no, let’s call him Javelin.” 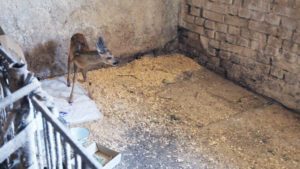 Javelin has hardly ever left its owner and gets along very well with cats and dogs. It eats three meals a day, mostly vitamin mixtures and semolina. It also eats rose petals from the flower bed for dessert. 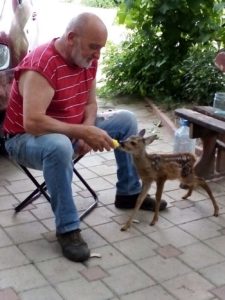 Two weeks after being rescued, Javelin had put on weight and the leg was almost completely healed. All the neighborhood children come running to play with it. The parents, including the hunters, forbade the hunting of these animals. The hunters looked at it and said they had never seen one so small.

“They all say they can never shoot roe deer again,” Alexander said. 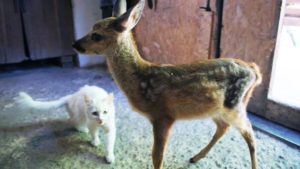 When Javelin grows up, Alxandre wants to give her to a sanctuary or zoo. He says that Javelin can no longer live in the wild because she trusts and loves people too much. 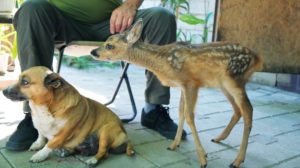