Watching Wiley the wolfdog crying at the graveside of his owner’s grandmother made me tear up! 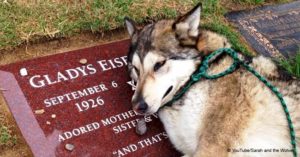 The late woman’s granddaughter uploaded this video, which shows her wolf crying on her grandmother’s grave. She explains that Wiley hasn’t done this before and hasn’t panted or puffed away like this since.

Wiley is a service wolf who helps veterans returning from war and suffering from PTSD through a program called Warriors and Wolves at the Lockwood Animal Rescue Center.

Some viewers have pointed out the wolfdog’s behavior seems to be reverse sneezing, to which Sarah Varley responded by writing, “I am not a vet so I can’t say if he’s reverse sneezing…I can tell you that he has never done that before and hasn’t done it since. I may be anthropomorphizing his actions but its how I’m choosing to deal with loss…” She adds Wiley is in good health. 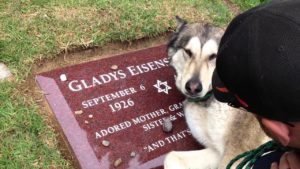 “We miss her too,” Sarah can be heard telling the dog from behind the camera, as Wiley is seen breathing heavily as if he was undergoing a terrible pain.