On Monday, the defendant appeared in court. A strict verdict was handed down for animal cruelty.

A woman abandoned her 4 dogs in her apartment, located in Moissy-Kramayel, when she was moving out. Neighbors complained to the police about the excessive barking of the locked dogs.

It turned out that the poor animals were calling for help. When they arrived on the scene, police saw the horrible living conditions of 3 pit bulls and an American Staffordshire terrier. 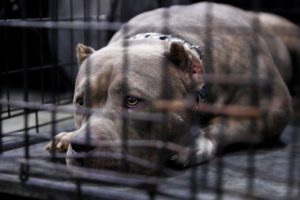 A woman locked her 4 dogs in 2 square meter cages . Two adult dogs were curled up in one of them.

“They were living in total darkness, in excrement and urine,” said Patrice Grillon, a lawyer for the Stéphane Lamar Animal Welfare Association, who is involved as a civil plaintiff in the trial. case, in Actu .

“When we decide to get a dog, we take care of it. Otherwise, there are always alternative solutions to ensure their welfare, “he added. Emaciated and injured dogs were handed over to the Vaux-le-Penille Center. While they were recuperating, an investigation was conducted.

The defendant was fined a total of 2,400 euros. She will also have to pay 2,000 euros in damages and 1,500 euros in court costs to the association Stéphane Lamart .

In addition, the court forced her to a ban on keeping animals for 3 years. Therefore, her dogs were taken away. They were placed in a shelter while they find a loving home for them.