Meet Bogart, a curious 4-year-old English bulldog who spends most of his day poking his head through the garden fence.
His garden fence is no ordinary fence. Ranveig Bjørklid Levinsen, Bogart’s owner, drew some hilarious drawings on the outside of the fence to give passersby a few laughs.

It’s essentially a stand-in one might encounter at a carnival: one hole has a jester’s cap drawn on it, and the other has a royal outfit on it.

What’s even funnier is that Bogart has no idea how hilarious he looks. Together with his mother, they often use both orifices at the same time. 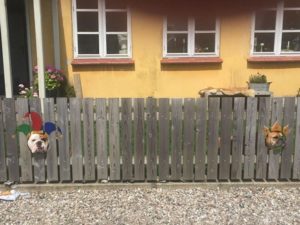 “Bogart has become popular in Denmark – he made it to the Instagram of one of Denmark’s biggest Influencers, and he’s also in the Norwegian dog group.” 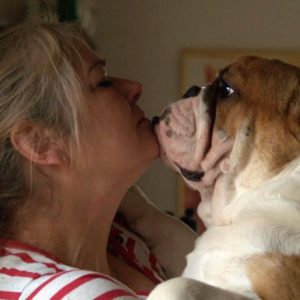 “Bogart is a sweet, very loving and happy little English bulldog,” Levinsen says.
“He loves to play, and he likes it when people come over – the more attention the better, and he can be very persistent. He’s the most stubborn dog I’ve ever had – if he doesn’t want to do something, he won’t do it.”