Bassel Abu Faher adopted Stella, a beautiful white Swiss shepherd, when he was only 12 years old. Stella was 40 days old at the time. A strong bond developed between them.

A year later, military conflicts broke out in Damascus, where he lived. Even when it was dangerous, the teenager took risks to walk his faithful furry friend.

In 2015, Bassel finally fled his home to Belgium.

Reluctantly, however, he had to leave Stella behind.

His journey through Lebanon and Turkey and across the sea to Greece in a rubber dinghy would have been dangerous for the dog. 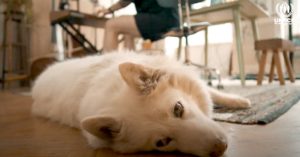 Bassel found refuge in Brussels, Belgium, with Johannes Vandermeulen and Ann Hoste. The good Samaritans took care of him and helped him thrive in the country he accepted.

Bassel, however, never forgot Stella. He was unhappy that he had left her to her fate. So Joannes and Ann decided that they should do whatever was necessary to reunite the couple. 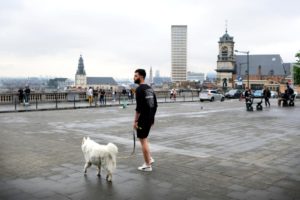 With the help of a daring taxi driver, Stella made it from Damascus to Beirut, where Joannes met her, made sure she had all the correct papers, and coaxed her into a crate for her journey to Brussels in the cargo hold of a commercial plane.

“It was extremely difficult to imagine what it would take to bring a dog from Beirut through Istanbul to Brussels. It was very complex,” Joannes explains. “Stella almost died on the way,when she got stuck with her collar in the cage. At the end, I was so tired and I was so emotional.”

Despite the challenges, Joannes was determined to see the mission through. 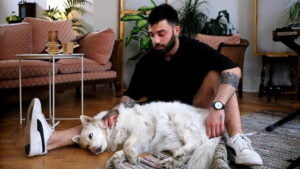 After all that trauma, Stella needed time to settle into her new life. But Bassel felt his life was complete again.

Surrounded by artists, Bassel, who had played the cello in Syria since the age of seven, rediscovered his love of music. Recording under the name Linear Minds, he has worked on five collaborations with composers as a sound designer and recorded four solo albums. He describes his music as a fusion of electronica and dance music, darkly melodic with driving bass lines.