A fancy-shaped pipe maker named Max didn’t get paid for one of his latest products. But he was only happy because he was able to give a pipe made in the shape of the head of the Terminator T-800 to Arnold Schwarzenegger himself.

And Max had no idea that his creation would ever get in front of the iron Arnie, but the magic of the Internet worked, and the people were convinced once again how nice Mr. Schwarzenegger is.

This is the kind of wooden pipe created by a woodcarver named Max. 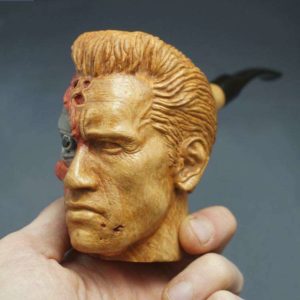 The craftsman with the nickname radonlab carves similar smoking pipes, mostly in the form of heads of famous people and characters.

Check out the level of detail! 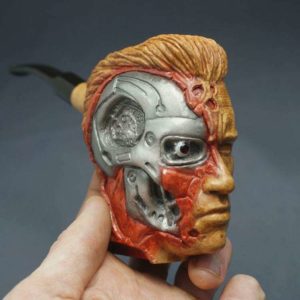 He posted his creation online and received a lot of positive feedback. However, he didn’t have tens of thousands of followers, so he didn’t expect much success.

The guy didn’t think that Mr. Schwarzenegger himself would stumble upon a photo of his pipe on the Internet. And then the coolest thing happened. On his Instagram, Max posted screenshots of communication in the comments with a certain user named GovSchwarzenegger: 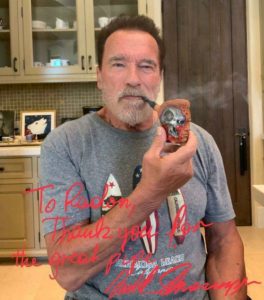 This is the promised photo of Arnold using the master tube in the case. The caption on the photo reads, “To Radon. Thank you for your magnificent pipe. Arnold Schwarzenegger.”

Here’s how Max himself reacted to it. He wrote about it in a post with a photo of Arnold:

“Probably the best day of my life. I’m very happy, and it’s not even about the big money or the large number of orders. He’s a legend, and I was able to touch it, and I’m honored.”

And by the way, it’s an interesting story. A regular guy made a pipe for Arnold, and not only did he accept the gift, but he sent a photo with a caption. It sounds fantastic, but it’s possible!