Demi Moore shared her secrets with the world, having released a couple of years ago the book “Inside out: My unperfect story”. In it, the actress talked about her difficult relationship with her parents, rape, failed personal life and addiction.

The star was addicted to alcohol, from which she suffered for more than one year. One of the directors promised her a role in his film, if she will be treated in a drug treatment clinic. Moore agreed, getting rid of what was ruining her life, but only for a while. 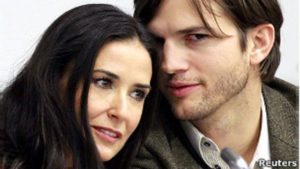 The artiste began to hit the bottle again when she married Ashton Kutcher. Former addiction returned with renewed vigor. Moore was where she started, and once again went through a difficult path to return to a full and healthy life.

Of course, the addiction did not go in vain. Whatever it was, the actress did not give up and continued to develop her career.

And on November 11, she celebrated her 60th birthday. 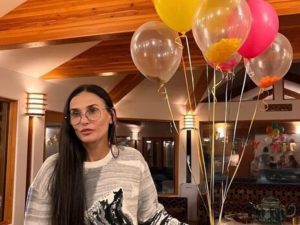 In the company of her daughters and her boyfriend, chef Daniel Hamm, the actress boarded a plane and flew to a cabin in the mountains.

On the plane, the company sang congratulatory songs and danced.

“This anniversary day makes you feel loved and grateful! Thank you all for the nice messages,” the actress wrote under the video. 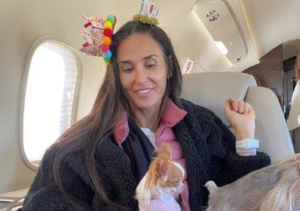 Demi was also congratulated by her former husband, the equally famous actor Bruce Willis – he and his current wife Emma Heming posted a photo on social media in which they are holding biographical books dedicated to Moore.

“Happy birthday, dear Demi! We love you inside and out,” Bruce and Emma wrote. Recall that Demi and Bruce have three children together — daughters Rumer Glenn Willis, Scout LaRue Willis and Tallulah Belle Willis — their marriage lasted from 1987 to 2000. 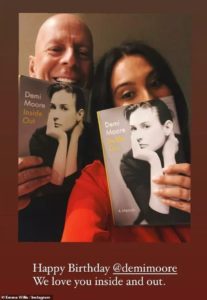 Demi was able to overcome the addiction and now looks quite happy. And we must admit that the actress looks amazing – much younger than her years.

This was also noted by users of the Net, many of whom could not hide their admiration.

“How I wish I looked like this at 60!” – emphasized one of the screen star’s followers. 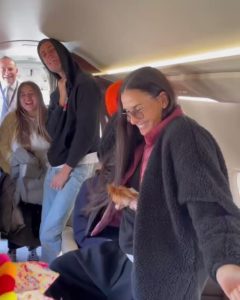 CELEBRITIES 0 138 views
Hanks and Wilson met when they appeared in the 1985 comedy “Volunteers,” in which