Pierce Brosnan amazed the world with his attractiveness and talent. The Irishman soon became a Hollywood heartthrob, appearing in several blockbuster movies.

Behind this charming movie star was a woman who was delighted to lead him to success, his first wife. 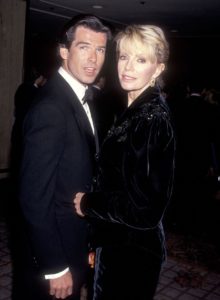 The celebrity married Cassandra Harris, an Australian actress of German and English descent.

«Cassie made me the man I am, the actor I am, the father I am,» he once acknowledged.

A mutual friend introduced them in the 1970s. Although Brosnan was immediately smitten by her beauty at first sight, it took a while for her to show interest in the actor. Cassandra went on to marry William Firth and then Dermot Harris, a British film producer.

Harris admitted:
«I had no interest in him…but we had a lot of things in common, like acting, books, music, and once we started talking, we never stopped.»

Although Cassandra had two children with Dermot, (Charlotte and Christopher), that was not a problem for Brosnan. He married her and then adopted the children when their father died in 1986. The actor revealed:

«We just hit it off as a family. At first, I was Pierce, then I was Dad Pierce and then I became Dad. Charlotte and Chris have been amazing in my life.»

A few years after the marriage, the couple added a son to the clan, Sean. Everything seemed to be going well, the family had integrated nicely.

Sadly, in 1987, they received shocking news. Cassandra had a family illness. She was diagnosed with ovarian cancer that had aggressively attacked her body, the same disease that killed her mother.

The Australian actress went through eight surgeries and chemotherapy, but despite the unpleasantness, Cassandra remained courageous. 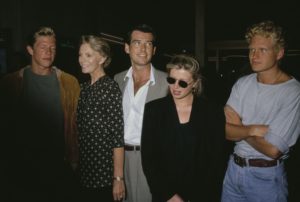 Fortunately, she was surrounded by a loving family, who often made her feel better and resume her daily life. Brosnan confessed:

«Sean would sometimes play doctor. I’d take care of her, and then she’d feel good and get on with her life: raising the kids, planning my career, redecorating this house.»

Sadly, in 1991, Cassandra died at Kenneth Norris Jr. Cancer Hospital in Los Angeles, USA. Brosnan had been with her the whole time, holding her hand, as she lay in the hospital bed.

According to the actor, his wife «began her journey» on their fourteenth wedding anniversary, and everyone was around except Sean. Brosnan held his wife’s hand as she breathed her last.

Somehow, Sean took the news in stride. Tears welled up in his eyes when he was told of his mother’s death, and he said, «It’s for the best, Dad. She’s not suffering anymore.»

After Cassandra’s passing, Brosnan stepped up his role as a father. Grief brought the family closer together, with dad and children going out often. At the same time, he kept in touch with Charlotte, who was in London.

Although Brosnan dedicated himself to being the best father by being there for his children, he realized that it would take time for the grief to go away. For this reason, he decided to consult a counselor for his youngest son, Sean.

Despite the challenges of being a single dad, the actor confessed that there was still laughter in his house. He also said he had wonderful children and a good job. 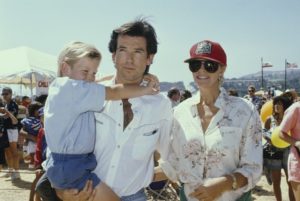 In 1994, a few years after losing Cassandra, the actor met Keely Smith, a reporter and television correspondent.

They soon started dating and realized they were right for each other. They spoke often and found it difficult to be apart. In 1995, the Irishman, who had just been cast to play James Bond, said:

«Wherever I went in the world, I missed her, and I would send her tickets to come over so we could be together.»

In 2001, after two attempts to marry (the failure was due to Sean’s health crisis), the couple finally held their secret wedding at Ballytubber Abbey in Mayo, Ireland. 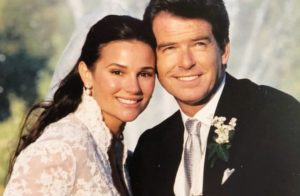 The venue was soundproofed to ensure privacy and hosted a hundred guests. Later, the couple hosted a lavish reception at Ashford Castle.

Hello Magazine photographed the exclusive ceremony for a hefty fee. So there was adequate security to deter intrusive paparazzi.

Brosnan also created a happy family with his second wife. The actor welcomed his third son, Dylan, in 1997.

Dylan is a bright young man who graduated from the USC School of Cinematic Arts. He is a cinematographer and model.

The couple’s second child, Paris, is also a model. Like his older brother, he is interested in filmmaking. In 2019, he documented his visit to Sri Lanka and shared the UN’s contributions to child hunger in the country.

Pierce Brosnan is in awe of the family he had with Smith. More than once, he has praised her for her contributions. According to him:

«I’m one of those guys who believes you need a strong woman in your life. I found a great woman in Keely. Not if I looked a million times harder would I find one as good. Being a father is a big responsibility, but it’s fulfilling.» 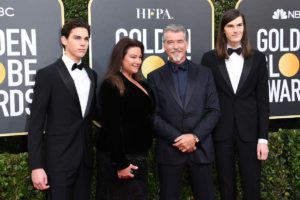 Brosnan is in awe of his wife

Brosnan and Smith have the most adorable marriage in Hollywood, and the 007 actor knows it! He marvels at how lucky he’s been to find genuine love with the right person twice.

Since his relationship with Smith began, there have been no scandals or controversy surrounding their romance. On the contrary, the couple has become inseparable and often compliment each other through interviews and on social media.

During the celebration of one of their wedding anniversaries, the actor shared a photo with captivating words in honor of his wife. It read:

«Happy anniversary, my love. We danced that night and we’re still dancing today. I could do it all over again.» 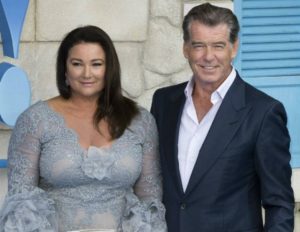 On one occasion, when an online troll shamed his wife, comparing the way she looked at the beginning of their marriage to the way she looks now, Brosnan came to Smith’s defense. He explained that some friends had offered her surgery to lose weight, but that he is still in love with every curve of her body.

He added that he was not only captivated by her beauty, but also by her personality from the beginning. Indeed, Brosnan and Smith are a very close couple.

More importantly, they have a beautiful family, including their talented children. This Hollywood marriage proves to the new generations that true love is not a myth and that it can exist between famous couples.

CELEBRITIES 0 6 views
The legendary actor, director, screenwriter and kung fu master died in 1973 at a