Previously, only dolled-up beauties with 90/60/90 parameters could become top models and photomodels. But over time, the trend began to change in favor of “unique” girls. In the world of fashion began to enter the art and art photography, which began to invite models with non-standard appearance. Because of their features they were previously laughed at, but today they have reached professional heights and success. It is clear that they are not called to advertise swimwear and cosmetics, but the world’s fashion houses and fasion photographers literally fell in love with these “alien” girls.

Many people still perceive the word model as a sex bomb, and imagine Claudia Schiffer and Naomi Campbell. But these young ladies are from a completely different camp and they bring a completely different message to fashion. In general, you can compare them to genres in movies. The Victoria’s Secret beauties can be called “blockbusters” with million-dollar budgets, and these girls can be referred to a more complex and subtle “auteur cinema”. Ukrainian model Maria Telnaya represented such fashion houses as Nina Ricci, Givenchy and YSL on the catwalks. They were undoubtedly attracted by the “elven” appearance of the girl – huge eyes and deep, penetrating look. However, the modeling career with its strict requirements forced Maria to abandon fame in favor of family and pedagogical activities. Hanna Gaby Odile is a Belgian intersex model (intersex people have sex characteristics different from the typical female or male body structure, formerly referred to by the outdated term “hermaphrodites”). Having made a career with designers such as Marc by Marc Jacobs, Rodarte, Ruffian and Thakoon, Hannah became an intersex rights activist and continued working with Alexander Wang, Dior, Gucci and Prada even after being hit by a car and learning to walk again. Hannah’s lack of pronounced sexuality and rehabilitation after the accident did not break her and proved that she is worthy of worldwide fame and recognition. “I eat everything I see before the show and I go to Pilates three times a week,” is how Jamie talks about preparing for Fashion Week.

What a contrast to the Victoria’s Secret Angels! Her long toned face, chiseled features and intense brown eyes, which is how Bochert captivated Marc Jacobs, Chanel and Givenchy (and this is just one-tenth of the fashion houses). Shooting for magazines, participating in advertising campaigns (from H&M to Jimmy Choo), and a happy marriage to musician and actor Michael Pitt – androgynous appearance opened all roads for Jamie Bochert. Protruding ears, deep set eyes, thin lips, and a sharp chin? Surely, after that description, you wouldn’t know we were talking about a world-famous model. Here, too, Molly never dreamed of becoming one until she was spotted at an American flea market.

“A mixture of an alien, a rat, a demon, a goblin, and a gremlin,” is how Molly describes her own appearance.

But the Chanel, Prada, and Balenciaga shows show that beauty standards are rapidly changing. To present the second Yeezy collection Kanye West took the yet unknown model Slick Woods. Slick’s unusual appearance helped her break out of poverty and get rid of her bad habits.

The girl recounts: “As a child, everyone thought I was an ugly duckling, no one even called me pretty. Is it possible that now my appearance has become a standard of beauty?” Ectodermal dysplasia is a rare genetic disorder that affects hair, teeth, nails, and appearance in general. It is this disorder that Melanie suffers from. Unlike many of the models in our selection, the girl has always dreamed of modeling. This dream helped her fight the ridicule of her classmates and depression. Melanie has only 3 teeth, practically no hair, and her facial features are far from usual… But this did not stop the model from starring in a Rammstein video, in the movie “Astral 4”, and taking part in candid photo shoots for famous magazines. 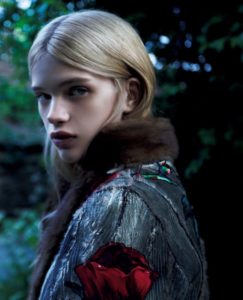 Austrian model Stella Lucia has a wide nose, sharp cheekbones, lowered outer corners of the eyes, puffy lips, and overhanging eyebrows. All this makes the girl’s look a bit morbid. But Givenchy, Alexander McQueen, Chanel, Fendi and other fashion houses constantly invite Stella as a model for their shows. In addition to the catwalk, the girl conquers the covers of the world’s largest magazines. The daughter of androgynous model Kristen McMenamy, Lily also appears on the catwalks of the world – despite her irregular bite, uneven chin, wide nose and the so-called look without a spark. Many people don’t like the model and are sure that the secret to her success is her mother. Nevertheless, Moschino, Marc Jacobs, Chanel and Louis Vuitton trust the girl’s modeling talent and often choose her from many competitors. Bright blue eyes with an Asian slit, no Hollywood smile, a wide nose and a square face shape are not exactly the classic runway type. Even when the girl was 11 years old, she was noticed as a future model, but she signed a contract with the agency a little later. Kelly’s unusual appearance allowed her to work with Prada early in her career, and then with other fashion houses and magazines. Deandra is African-American, yet albino, with green eyes, wheat-colored hair, and typical Negro facial features. The model has been on many fashion covers of American glossy, has appeared in advertising campaigns for cosmetic brands, and has also starred in music videos. She can be seen in the Kanye West Power commercial alongside international top models Irina Shayk and Jessica White, as well as in the Beyonce Pretty Hurts music video. 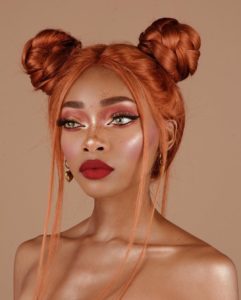 Popular model Nyane Lebajoa has a doll-like appearance. However, she has never had plastic surgery. Nyane was born in Middlesbrough, Great Britain. She started blogging on Tumblr at the age of nine and has continued to actively develop her social media pages ever since. The girl accepts herself as she is, she is not embarrassed at all, although, like any girl, she has a lot of complaints about her own appearance. At the moment she is developing her own MOOD brand, producing cosmetics for hair. Nyane loves to experiment, she’s constantly changing the color of her hair, length, types of perm. Her unusual eye shape and freckles make her look like an alien.